In a milestone exercise that “transited the Revolutionary Armed Forces of Colombia (FARC-EP) from weapons to politics,” last month’s congressional elections drew millions of Colombians to the polls amid a trend towards a reduction of electoral violence, the senior-most United Nations official in the country said on Thursday

The mid-March elections were the first after the signing in 2016 of a peace deal between the FARC-EP and the Colombian Government that ended the Western hemisphere’s longest-running conflict in which more than 200,000 people were killed.

“While it is too early to take stock of a peace process that has set ambitious and long-term goals, we already observed that it has achieved a notable reduction of violence in the congressional elections,” Jean Arnault, head of the UN Verification Mission in Colombia, set up two years ago to monitor and support implementation of the peace deal.

He said that the presidential election is now five weeks away, “and against a background of political polarization, the campaign so far has confirmed the trend towards a reduction of electoral violence.”

Among legislative developments, he said the Constitutional Court had endorsed the Law on the Status of the Opposition, which among other things provides opposition parties with access to media, funding and representation in the Senate and the Chamber of Representatives for runners-ups in vice- and presidential elections.

It also declared constitutional FARC’s political participation, including 10 Congressional seats provided for in the Peace Agreement.

Turning to the socioeconomic reintegration of FARC members, under a new decree, the Superintendent of Banks can provide banking services to former FARC members in the reintegration process – excepting those on international sanctions lists.

The next few months provide an opportunity to bring together government institutions, local authorities and social organizations – Jean Arnault, Head of the UN Verification Mission in Colombia

Recognizing a number of new institutions as “a substantial change,” Mr. Arnault said “the next few months provide an opportunity to bring together government institutions, local authorities and social organizations to press forward” with the peace agenda.

He also asserted that the last couple of weeks have brought new challenges to the peace process, such as the arrest of a FARC leader on drug trafficking, which “reverberated in a country that remains divided around the peace process.

Mr. Arnault added that both sides were calling for calm and continued to pursue the path of the Peace Agreement, calling it “very important in addressing misgivings and mistrust among former combatants in the reintegration areas.”

The Mission wholeheartedly supported the reintegration of former combatants on a more solid basis before the end of the Government´s mandate.

“Weaknesses in this effort can only increase the risk of the drift of some ex-combatants to criminal groups,” he explained. Citing the Secretary-General’s report on the Mission, he said “the ingredients for a breakthrough are known – viable productive projects, functional cooperatives and the availability of land –  and much of the legal and technical preparation has been done.”

As negotiations between the Government and the National Liberation Army have resumed, Mr. Arnault told the Council that both parties have reiterated their interest in UN support to implement a future ceasefire.

“The Security Council will make the appropriate decisions in due time,” he continued. “Meanwhile we will do our best to ensure that the design of the ceasefire is as robust as possible.”

In implementing the Peace Agreement, Mr. Arnault stressed that circumstances have occasionally tested the commitment of the two parties, saying: “They have stayed the course.”

“The unanimous support consistently voiced by the Council have helped sustain their resolve.  It will continue to be a source of confidence and strength,” he concluded. 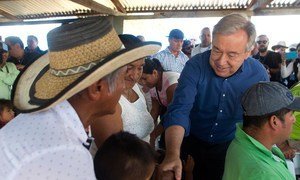