Despite the Security Council’s demand for cessation of hostilities in Syria, civilians in the war-torn country continue to bear the “enormous” cost of intense military activity by parties to the conflict, the top United Nations relief official said Tuesday.

“Since the passage of resolution 2401, the Secretary-General has on many occasions called for its full implementation,” stated Mark Lowcock, the UN Emergency Relief Coordinator, referring to the the Council text adopted in late February calling for a 30-day ceasefire across Syria.

“However, rather than implement the resolution of this Council, we have seen parties to the conflict sustain intense military activity at an enormous human cost.”

Briefing the 15-member Security Council on the humanitarian situation in Syria, Mr. Lowcock said that UN agencies and relief partners have been delivering assistance to those in need but the response remains challenged by a number of factors, including severely limited resources.

“As we approach the conference in Brussels on 24-25 April, we have an immediate opportunity to progress on easing the humanitarian suffering by fully funding humanitarian operations,” he said, noting that the appeal for Syria is currently less than 15 per cent funded.

“I cannot overstate the importance of sustaining and scaling up the international response,” stressed the UN aid chief.

He also informed the Council that about 100,000 displaced persons returned to their homes in Raqqa since the Islamic State of Iraq and the Levant (ISIL or Da’esh) was driven out last October.

However, conditions there are not conducive for people coming back as at area remains littered by unexploded ordinances, improvised explosive devices, and other explosive remnants of war, with children most at risk. Furthermore, there is widespread food insecurity among returnee households, and the health and education systems are in near ruin.

Mr. Lowcock also spoke of the situation in Rukban, eastern Ghouta and Idleb.

As to Afrin, in north-west Syria, humanitarian actors continue to struggle to gain sustained access to the area, and freedom of movement for internally displaced persons remains severely limited, he said. 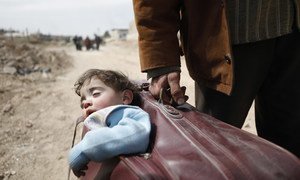 In Syria, the mass evacuation of civilians is threatening to leave aid workers “overrun” and “acutely underfunded,” as details emerge of the unparalleled destruction in urban areas like the former ISIL-held city of Raqqa, UN senior adviser Jan Egeland said on Wednesday.