Giles Clarke/UN OCHA
A military guard sits in the former Assembly Hall of the Governor of Saada, which now lies in ruins. Since the Yemen conflict escalated two years ago, much of the city's infrastructure has been destroyed.

“A negotiated political settlement through inclusive intra-Yemeni dialogue is the only way to end the Yemeni conflict and address the ongoing humanitarian crisis,” Martin Griffiths, the Special Envoy of the Secretary-General for Yemen, told the Security Council today.

“Peace becomes possible when we see the good in our foes, even though we can see clearly the cruelties of war,” he added.

In his first briefing to the Security Council since assuming his responsibilities in March, Mr. Griffiths informed its members that he plans to develop principles for peace negotiations within the next two months.

The promised drive for a settlement comes as living conditions in Yemen become increasingly desperate, in what now the world’s worst humanitarian crisis.

Speaking alongside the Mr. Griffiths, the UN Emergency Relief Coordinator, Mark Lowcock, said: “More than 22 million people urgently require some form of humanitarian help, including 8.4 million people who struggle to find their next meal.”

Peace becomes possible when we see the good in our foes, even though we can see clearly the cruelties of war – UN Special Envoy Martin Griffiths

While he said it was his perception that the warring sides in Yemen desire peace, Mr. Griffiths drew attention to the increased number of ballistic missiles launched towards Saudi Arabia, intensified military operations in north-west Yemen, and airstrikes in the capital of Sana’a and other cities that are causing civilian deaths and diminishing hopes for peace.

Conflict is ongoing there between an international coalition of forces supporting President Abdrabbuh Mansur Hadi on the one side, and Houthi militias and allied units of the armed forces on the other.

“The people of Yemen are in desperate need of signs that this war will soon end,” Mr.  Griffiths said.

Mr. Griffiths assumed his responsibilities on 11 March, succeeding Ismail Ould Cheikh Ahmed who had served as the Special Envoy since April 2015.

UN Photo/Manuel Elías
Martin Griffiths, Special Envoy of the Secretary-General for Yemen, briefs the Security Council meeting on the situation in that country.

Efforts to provide humanitarian relief to millions of Yemenis has been severely hampered, Mr. Lowcock, the Organization’s aid chief, said, because of bureaucratic obstacles imposed by authorities as well as restrictions on imports and customs clearance, and long delays and searches at checkpoints.

Another risk of cholera outbreak

Mr. Lowcock, who is also the UN Under-Secretary-General for Humanitarian Affairs, warned that another major outbreak of cholera looms, though aid workers are trying to take preventive measures and are pre-positioning supplies should it occur.

“A successful response requires safe unimpeded and unhindered access across and into Yemen for humanitarian staff and humanitarian supplies,” he said, as well as predictable fuel imports to keep hospitals and water treatment plants running. 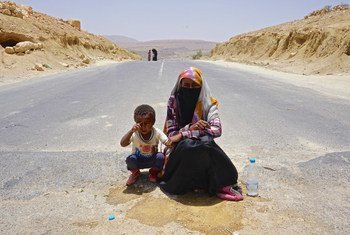