While the world economy continues to show broad-based momentum, a new report released Tuesday by the International Monetary Fund (IMF) is warning that there may be choppy seas ahead, caused by increasing protectionism or tit-for-tat trade wars.

“Global growth is projected to soften beyond the next couple of years,” said the report, explaining that: “Once their output gaps close, most advanced economies are poised to return to potential growth rates well below pre-crisis averages – held back by aging populations and lackluster productivity.”

“Despite the good near-term news, longer-term prospects are more sobering,” said Maurice Obstfeld, Economic Counsellor and Director of Research at the IMF, the specialized United Nations agency working to ensure stability in the global financial system.

“Advanced economies – facing aging populations, falling rates of labor force participation, and low productivity growth – will likely not regain the per capita growth rates they enjoyed before the global financial crisis,” he continued.

However, despite some improvement in the outlook for commodity prices, he pointed out that some exporters will need to diversify their economies to boost future growth and resilience.

The IMF, which is holding its annual Spring Meetings in Washington, D.C., with the World Bank, continued to echo its advice that the current cyclical upswing offers policymakers a good opportunity to make longer-term growth more resilient and inclusive.

“Sound policies can extend the upswing while reducing the risks of a disruptive unwinding,” Mr. Obstfeld stated. “Countries need to rebuild fiscal buffers, enact structural reforms and steer monetary policy cautiously in an environment that is already complex and challenging.”

While some governments are pursuing substantial economic reforms, trade disputes risk diverting others from the constructive steps they would currently need to take to improve and secure growth prospects, Mr. Obstfeld warned.

Despite widespread economic growth, public optimism has been eroding over time by job and wage polarization trends, raising the threat of political developments that could destabilize various economic policies – even beyond those of trade.

“Governments need to rise to the challenges of strengthening growth, spreading its benefits more widely, broadening economic opportunity through investments in people […] that could radically transform the nature of work,” underscored Mr. Obstfeld. “Fights over trade distract from this vital agenda, rather than advancing it.”

Trade tensions started in early March when the US announced it would levy steel and aluminum tariffs for national security reasons, provoking China’s announcement of retaliatory tariffs on US imports.

In the present environment, excessive global imbalances should be reduced multilaterally.

While each Government can do much on its own to promote stronger, resilient and inclusive growth, multilateral cooperation remains essential to address a range of challenges – including climate change, infectious diseases, cyber-security, corporate taxation and corruption.

“Global interdependence will only continue to grow and unless countries face it in a spirit of collaboration, not conflict, the world economy cannot prosper,” Mr. Obstfeld underscored.

♦ Receive daily updates directly in your inbox - Subscribe here to a topic.
♦ Download the UN News app for your iOS or Android devices.
Economic development 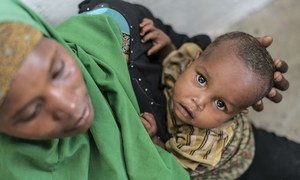 Building resilience for the world's most vulnerable people by reducing poverty, promoting shared prosperity, enhancing food security, and sustaining peace in crisis-affected situations will be the focus of a new partnership framework agreed by the United Nations and World Bank.