At Security Council, UN chief pushes for creation of body to determine perpetrators of chemical attacks in Syria

United Nations Secretary-General António Guterres on Friday again called for the creation of an independent panel that could determine who used chemical weapons in Syria, as the absence of such a body increases the risks of a military escalation in a country already riven by “confrontations and proxy wars.”

“Syria indeed today represents the most serious threat to international peace and security,” the Secretary-General said in a briefing to the Security Council.

“In Syria, we see confrontations and proxy wars involving several national armies, a number of armed opposition groups, many national and international militia, foreign fighters from everywhere in the world, and various terrorist organizations,” he added.

His plea comes after the mandate of the Joint Investigative Mechanism (JIM), which was created as a body to attribute responsibility for the use of chemical weapons in Syria in 2015, expired in November 2017.

Due largely to divisions among its five permanent members ­– China, France, Russia, the United Kingdom and the United States – the Council could not adopt three draft resolutions that would have responded to a suspected chemical weapons attack in the Syrian town of Douma.

Mr. Guterres, in a letter to the Council two days ago, expressed his “deep disappointment” at the failure of establishing an accountability mechanism similar to JIM.

On Wednesday, he also called the Ambassadors of the five permanent members to reiterate his “deep concern about the risks of the current impasse” and stressed the need to “avoid the situation spiralling out of control.”

In today’s briefing to the Council, the UN chief warned that “increasing tensions and the inability to reach a compromise in the establishment of an accountability mechanism threaten to lead to a full-blown military escalation.”

“For eight long years,” he said, “the people of Syria have endured suffering upon suffering. I reiterate: there is no military solution to the conflict.”

The Cold War is back with a vengeance, but with a difference.

The Organization for the Prohibition of Chemical Weapons (OPCW) – the body monitoring and facilitating implementation of the Chemical Weapons Convention (CWC), which entered into force in 1997 – has dispatched a fact-finding mission to Syria in response to latest allegations of chemical weapons use.

But this body’s work does not go beyond “establishing the facts,” such as whether or not banned chemical substances were used.

Sweden, a non-permanent Council member, on Thursday circulated a new proposal that asks for four things.

It condemns “in the strongest terms” any use of chemical weapons in Syria and expresses alarm at the alleged incident in Douma last weekend; demands full access and cooperation for the OPCW fact-finding mission; expresses the Council’s determination to establish a new impartial and independent attribution mechanism, based on a proposal by the Secretary-General; and requests the Secretary-General to dispatch immediately a high-level disarmament mission to Syria.

Mr. Guterres, in today’s meeting, also highlighted dangerous circumstances encompassing the wider Middle East region, which he said is facing “a true Gordian knot – different fault lines crossing each other and creating a highly volatile situation with risks of escalation, fragmentation and division.”

“The Cold War is back with a vengeance, but with a difference,” said the UN chief.

The mechanisms and the safeguards to manage the risks of escalation that existed in the past no longer seem to be present, Mr. Guterres said.

Those “fault lines” also include the Palestinian-Israeli divide as well as the Sunni-Shia divide, evident from the Gulf to the Mediterranean.

“Many forms of escalation are possible,” he warned.

♦ Receive daily updates directly in your inbox - Subscribe here to a topic.
♦ Download the UN News app for your iOS or Android devices.
syria|chemical weapons 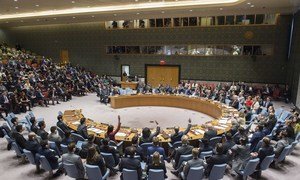 Amid the risks of the situation in Syria “spiraling out of control,” the United Nations chief has appealed to the five permanent members of the Security Council to break the current deadlock on reported use of chemical weapons in the war-torn country.