UNICEF/Vockel
UNICEF estimates that nearly 800,000 children have been displaced by inter-ethnic conflicts in the Provinces of Tanganyika and South Kivu, in the Democratic Republic of the Congo. Some, like this young girl and her sister, have made their way to some of the makeshift camps that have sprung up around the city of Kalemie.
13 April 2018
Humanitarian Aid

The first-ever international conference to help the Democratic Republic of the Congo (DRC) opened at the United Nations Office at Geneva on Friday amid dire warnings of a growing humanitarian crisis in the vast African country.

Despite massive natural resources and major socio-economic changes under Government-led initiatives, years of violence by armed groups vying for control – along with ethnic strife in the country’s restive east, and political and ethnic instability – has created massive food insecurity, according to the UN Office for the Coordination of Humanitarian Affairs (OCHA).

In Geneva, UN Emergency Relief Coordinator Mark Lowcock told donors that more than two million children are suffering from severe acute malnutrition in DRC and 13 million people require assistance there urgently – double the number of those in need last year.

He added that DRC is also facing “the worst outbreak of cholera in fifteen years,” as well as “an epidemic of sexual violence,” committed mainly against children.

“As I speak, the resurgence of an inter-ethnic conflict in Ituri in February is killing many people and leading to internal and cross-border displacement of even more,” he said.

Thousands of farmers in the crisis gripped Kasais have missed three successive agricultural seasons, resulting in a drop in agricultural production, he added.

Speaking to journalists in Geneva during a break in the conference, Mr. Lowcock said that he expected to confirm more than $500 million in pledges before the end of the day.

Total needs for the DRC for this year are estimated at $1.7 billion ­– nearly four times more than the amount secured last year.

An additional $500 million is needed to support 807,000 Congolese refugees in neighbouring countries and more than 540,000 refugees from other countries who are in DRC.

The question of securing sufficient funding was underlined by UN Secretary-General António Guterres in his opening address to the pledging conference.

He urged Member States in Geneva via a video message to show solidarity for the “millions of people who are suffering” in one of the world’s largest humanitarian crises as the UN and the DRC Government work together to respond to needs.

During the conference, Jean-Philippe Chauzy, from the UN migration agency, spoke of the need to strengthen international support for the people of the DRC.

“Confronted with rising intercommunal tensions, political instability and an increasingly insecure environment, the international humanitarian community needs to strengthen its support and commitment to the Congolese people,” said Mr. Chauzy, who is DRC Chief of Mission for the International Organization for Migration (IOM).

He added: “We simply cannot ignore the speed, and magnitude of [this] crisis.”

Alongside the UN, the pledging conference was co-hosted by the Netherlands and the European Commission.

Sigrid Kaag, Minister for Foreign Trade and Development Cooperation of the Netherlands, described the DRC as a “forgotten” conflict that desperately needed more support from the international community.

She highlighted the impact of gender-based violence on girls and young women whom she had met on a recent visit to DRC.

Some had requested help in the form of rape kits, while others had asked how to look after the babies they had given birth to after their sexual assault.

That message was underlined by conference co-host Christos Stylianides, European Commissioner for Humanitarian Aid and Crisis Management, who spoke of the violence and “stories of unbelievable pain” that he heard while visiting the country in recent weeks.

Asked at the press conference about the decision by the DRC authorities not to attend the pledging conference, Mark Lowcock underlined the scale of the problems in the country – and the importance of securing funding for some 150 organizations working to support humanitarian action “under the leadership” of the DRC authorities in 20 provinces. 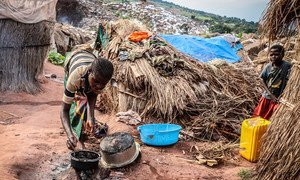