MINUSMA/Harandane Dicko
A battalion of peacekeepers from MINUSMA patrol the streets of Gao, northern Mali at night.
6 April 2018
Peace and Security

Late Friday night the United Nations Security Council condemned “in the strongest terms” an attack earlier in the day on a vehicle of the UN Multidimensional Integrated Stabilization Mission in Mali (MINUSMA) that killed a Nigerien peacekeeper in Gao, which is in the country's restive north.

“The members of the Security Council expressed their deepest condolences and sympathy to the family of the victim, as well as to the Government of Niger and to MINUSMA,” the Council said in a statement paying tribute to the peacekeepers who risk their lives and calling on the Malian Government to swiftly investigate the attack and bring the perpetrators to justice.

The Council members reiterated that “any acts of terrorism are criminal and unjustifiable,"  and reaffirmed the need for all States to combat, in accordance with the UN Charter and other obligations under international law, threats to international peace and security caused by terrorist acts.

They echoed their full support for MINUSMA, the French forces that support it, Special Representative of the Secretary General for Mali Mahamat Saleh Annadif and for the UN Mission to assist the Malian authorities and people in their efforts to bring lasting peace to their country – including through the implementation of the 2015 peace deal that was supposed  to bring about stability.

The Council recognized the determination and ownership of the Governments of the Group of Five for the Sahel States (G5 Sahel) to address terrorism and transnational organized crime, including through cross-border joint military counter-terrorist operations.

The members expressed concern over Mali's security situation and the transnational dimension of the terrorist threat in the Sahel region, urging the Malian parties to “fully implement the [peace] Agreement without further delay.”

Secretary-General António Guterres also condemned the attack, the second against MINUSMA in two days,  and called on the Malian authorities to “swiftly and thoroughly investigate the incident and bring the perpetrators to justice," said his spokesperson, Stéphane Dujarric.

“The Secretary-General wishes to express his sincere condolences to the Government of Niger and to the family of the victim, and commends the brave men and women serving in MINUSMA," he added.

The UN mission in Mali is one of the most dangerous, having taken more than 160 peacekeepers’ lives.

MINUSMA was established to quell teh violence and instability in the wake of a 2012 military overthrow of the government in Bamako and subsequent takeover of the country's vast northern region by rebels. 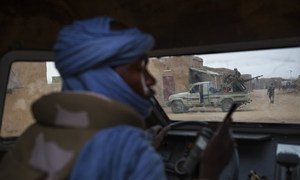 United Nations Secretary-General António Guterres and the Security Council have strongly condemned an attack on UN peacekeepers in Mali and underscored that such attacks may amount to war crimes under international law.