The United Nations refugee agency is scaling up its assistance to the rapidly growing number of Venezuelans arriving in Brazil, with daily arrivals averaging 800 in recent days amid the worsening political and socio-economic situation in their country.

“As the complex political and socio-economic situation in their country continues to worsen, arriving Venezuelans are in more desperate need of food, shelter and health care. Many also need international protection,” William Spindler, spokesperson for the Office of the UN High Commissioner for Refugees (UNHCR), told reporters in Geneva, Switzerland.

More than 52,000 Venezuelans have arrived in Brazil since the beginning of 2017. Of those, 25,000 are asylum seekers, 10,000 hold temporary resident visas, while the rest are working to regularizing their status, according to UNHCR. The Government’s latest estimates show that more than 800 Venezuelans are entering Brazil each day.

An estimated 40,000 have entered through the isolated northern state of Roraima and are living in Boa Vista, the state capital, Mr. Spindler added.

Authorities recently declared a state of emergency and have allocated about $58 million for emergency humanitarian assistance for people coming from Venezuela.

For its part, UNHCR has been working closely with the Brazilian Government to register Venezuelans and ensure all arrivals have proper documentation.

Once documented, Venezuelan asylum-seekers, as well as those with special stay permits, have the right to work, and access health, education and other basic services.

Venezuelans who are living on the streets are facing growing risks, including sexual exploitation and violence.

To mitigate those risks, two new shelters have been opened in Boa Vista over the last two weeks. UNHCR is managing the new shelters, which are each nearly at its capacity of 500 people. Priority is given to families with children, pregnant women, elderly people and others with specific needs.

UNHCR is also helping the Government identify Venezuelans willing to relocate voluntarily from Roraima to other parts of Brazil as relocation will provide longer-term solutions and ease the strain on local communities in Roraima.

Two flights, operated by the Brazilian Air Force, are leaving Boa Vista this week. One left yesterday, flying 104 Venezuelans to Sao Paulo. The second is expected today to Sao Pablo and Cuiabá, the capital of the Mato Grosso state located in the centre of the country.

UNHCR has recently requested from donors an initial $46 million to implement its regional response plan for Venezuelans in the main host countries, including Brazil. So far, this plan is only four per cent funded. 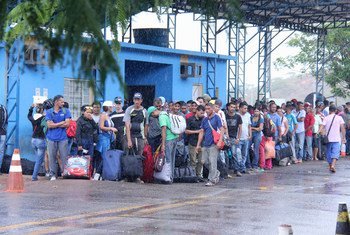 As deepening economic woes force thousands of Venezuelans to flee the crisis-gripped country, the United Nations on Tuesday issued guidance on treating the population as “refugees,” while the head of the UN World Food Programme (WFP) warned that the outflow into neighboring countries such as Colombia constitutes a “humanitarian disaster.”