PresseBox.de flickr
A UNEP solar energy system, the largest of its type in Africa.

Last year, the world installed a record 98 gigawatts of new solar capacity, far more than the net additions of the rest – other renewables, fossil fuel and nuclear, according to the Global Trends in Renewable Energy Investment 2018 report, released Thursday by the UN Environment Programme (UNEP) and its partners.

Solar power also attracted far more investment than any other technology, at $160.8 billion, up 18 per cent.

A driving power behind last year’s surge in solar was China, where an unprecedented boom saw some 53 gigawatts added – more than half the global total – and $86.5 billion invested, up 58 per cent.

The extraordinary surge in solar investment shows how the global energy map is changing and, more importantly, what the economic benefits are of such a shift – UNEP chief

“The extraordinary surge in solar investment shows how the global energy map is changing and, more importantly, what the economic benefits are of such a shift,” said UNEP chief Erik Solheim.

Last year was the eighth in a row in which global investment in renewables exceeded $200 billion – and since 2004, the world has invested $2.9 trillion in these green energy sources.

Meanwhile, countries in the Asia-Pacific region, which is projected to account for two-thirds of global energy use between now and 2040, committed to accelerate the transition to sustainable energy by scaling up their share of renewables, as a United Nations forum in Bangkok wrapped up on Thursday.

“There is a palpable sense of the enormous opportunities ahead that can transform the energy scene,” Shamshad Akhtar, the Executive Secretary of the UN Economic and Social Commission for Asia and the Pacific (ESCAP), told the two-day forum, acknowledging the growing recognition by governments, the private sector and investors, that a sustainable, low carbon energy system is the only option to safeguard the future.

The highlight of the Second Asian and Pacific Energy Forum was the adoption of a ministerial declaration, which lays out a series of actions to encourage the sustainable use of energy, including through greater regional cooperation to facilitate cross-border infrastructure and energy trade to advance the 2030 Agenda for Sustainable Development.

UNESCAP
Energy Transition Pathways for the 2030 Agenda in Asia-Pacific

Organized by ESCAP, the Forum provided a platform for governments, the UN system, private companies, international organizations, and civil society organizations to review the region’s implementation of Sustainable Development Goal 7 (SDG7) on affordable and clean energy.

Delegates concluded that Asia and the Pacific has made remarkable progress on universal access to electricity, with renewable energy surpassing price benchmarks that were only expected in 2020. However, greater efforts are needed throughout the region to achieve targets on reliance on clean fuel and renewable energy, and energy efficiency. 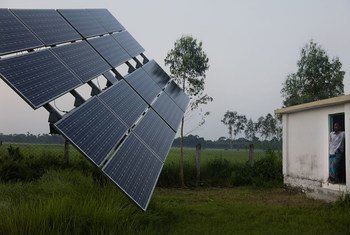 22 November 2017
Energy is key to global development, but the world’s poorest and most vulnerable nations fare up to six times worse than their more industrialized counterparts when it comes to accessing the vital resource, the United Nations warned on Wednesday.