One United Nations peacekeeper was killed and 11 others were wounded early Tuesday morning when the UN Multidimensional Integrated Stabilization Mission in the Central African Republic (MINUSCA) was attacked by rebel fighters.

“The Secretary-General extends his condolences to the family of the fallen peacekeeper and wishes a speedy recovery to the injured,” Stéphane Dujarric, spokesperson for the Secretary-General, told reporters at the regular press briefing in New York.

The temporary MINUSCA base in Tagbara, a village 60km north-east of Bambari in Ouaka Prefecture, was violently attacked by anti-Balaka fighters. After several hours of exchanging gunfire, one blue helmet was killed and 11 others injured. More than 22 anti-Balaka attackers were killed, according to the UN.

In response to the attack, MINUSCA evacuated the wounded and the slain peacekeeper, and deployed reinforcements to Tagbara. Later that morning, they also discovered the bodies of 13 men, four women and four children near a church.

The evening before, MINUSCA peacefully recovered and sheltered 13 women, seven men and three children after the temporary Tagbara base was informed that ex-Seleka Unité pour la Centrafrique (UPC) had detained the 23 people.

The Mission also reported that in a joint operation with the Central African armed forces on Saturday, 15 people who had been taken hostage by the Lord's Resistance Army were rescued.

“The UN Mission strongly condemns all of these events,” MINUSCA said.

Clashes between the mainly Muslim Séléka rebel coalition and anti-Balaka militia, which are mostly Christian, plunged the country of 4.5 million people into civil conflict in 2013. 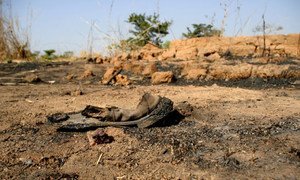 The United Nations Security Council on Tuesday denounced an attack against education workers that killed six, including one UN Children’s Fund (UNICEF) consultant, who were traveling in the north-western prefecture of the Central African Republic (CAR).