With relief agencies in Bangladesh struggling to assist more than a million vulnerable Rohingya refugees crowded into makeshift camps along the country’s south-east coast, the World Health Organization (WHO) on Thursday appealed for international support to help the cash strapped health sector scale up its response.

“This is one of the biggest humanitarian crises in recent times,” Dr. Poonam Khetrapal Singh, the WHO South-East Asia Regional Director told a partners’ meeting in Dhaka, Bangladesh’s capital.

“No single agency or the Government of Bangladesh alone can meet the massive health needs of such a large population group,” she said.

The Rohingya population has settled in an area prone to cyclones, and on terrain that will flood as soon as rains begin. “The risk of outbreak of life threatening water and vector borne diseases under such conditions is huge,” she explained.

Since August 2017, nearly 700,000 minority Muslim Rohingyas have fled violence in Myanmar across the border into Bangaldesh’s Cox’s Bazar, joining several hundred thousand more that were already settled there in overcrowded camps.

Coordinating the work of over 100 partners on the ground, along with the Ministry of Health, WHO has facilitated a contingency plan for the rainy season.

To minimize the risk of diseases and deaths, the plan aims to continue health services during rains and floods. Additionally, all 207 health facilities in the area have been assessed for vulnerability during rains, with 25 per cent of them slated for relocation.

Since the start of the Rohingya crisis, 900,000 doses of cholera vaccine were administered to the refugees and their host communities, in addition to two vaccination campaigns for measles and three for diphtheria, which concluded earlier this week with WHO support.

“However,” Dr. Khetrapal Singh warned “much of the health sector’s capacity to respond depends on availability of resources.”

Moreover, the vulnerable population will need continued services for reproductive, maternal and child health, communicable and non-communicable diseases, as well as psychosocial support, the WHO Regional Director added.

WHO has appealed to partners for $16.5 million for continued support in 2018, which is part of the $113.1 million being sought by all health partners under the Joint Response Plan for the Rohingya crisis. 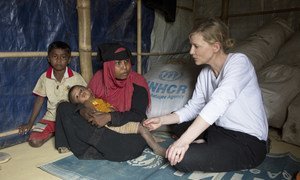