UN Secretary-General António Guterres expressed his deep gratitude for the $930 million provided on Tuesday evening by the two donor countries to the Yemen Humanitarian Fund.

“I would like to take this occasion to appeal to all the other donors who will be meeting in Geneva next week… to follow the same generosity” shown by the two countries, the UN chief told reporters at the world body’s New York Headquarters, after meeting with Prince Mohamad Bin Salman Al Saud, Saudi Arabia’s Crown Prince.

“These funds cover almost one-third of the $2.96 billion required to implement the 2018 Yemen Humanitarian Response Plan, which will enable the United Nations and its partners to help alleviate the suffering of millions of vulnerable people across Yemen,” read a statement issued by Mr. Guterres’ office, following the signing of the memorandum on the voluntary contributions.

More than 22 million people in Yemen require humanitarian aid or protection assistance, including 2 million who are internally displaced due to the ongoing conflict between the Government and rebel forces.

On 3 April, donors will meet in the humanitarian pledging conference in Geneva, Switzerland.

In his meeting with the Crown Prince, who is also First Deputy Prime Minister and Defence Minister, Mr. Guterres said “to give to those in need is a central pillar of Islam,” noting that two-thirds of the refugees are Muslims and are received by Muslim countries.

The Secretary-General and the Crown Prince discussed the obligations of all parties to the conflict under international humanitarian law to protect civilians and civilian infrastructure, and the critical need for humanitarian access across the country and for all of Yemen’s ports to remain open to both humanitarian and commercial movement.

They also discussed the need for the parties to the conflict to work towards a negotiated political settlement through inclusive intra-Yemeni dialogue.

Mr. Guterres expressed the UN’s readiness to work together with Saudi Arabia for these objectives.

The UN, through its envoy, has been engaged in helping Yemenis to find a peaceful solution.  UN agencies and partners are also on the ground to deliver life-saving aid. 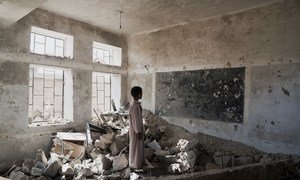 Yemen’s education system has been devastated by the country’s brutal conflict, the United Nations Children’s Fund (UNICEF) said on Tuesday, reporting that at least half a million children have dropped out of school since the 2015 escalation of the war.