UN News/Matt Wells
Rev. Jesse Jackson at UN Headquarters in New York after speaking at an event celebrating “A Decade of Recognition for the Contributions, Achievements and Challenges of People of African Descent Worldwide.”
26 March 2018
Human Rights

There needs to be a “massive global coalition of conscience” to enshrine the values of racial equality and human rights for all, declared civil rights icon Rev. Jesse Jackson, speaking at the United Nations.

The veteran leader of the struggle for racial justice was at UN Headquarters last week to speak at an event marking the Decade of Recognition for the Contributions, Achievements and Challenges of People of African Descent Worldwide.

He took part in a panel discussion for the event; part of a programme celebrating the International Decade for People of African Descent, running from 2014-2024, as well as the International Day for the Elimination of Racial Discrimination, held each 21 March.

Mr. Jackson told the forum that racism was “a sin before God” and a ruthless tool of oppression, exploitation and profit.

“Racial idolatry is a mental health issue” he added, which “manifests itself in so many ways, even in our politics.”

The head of the Chicago-based Rainbow PUSH Coalition, which fights for social change, Mr. Jackson ran for President as a Democratic Party candidate in 1984 and in 1988, and pointed out that next month also sees the 50th anniversary of the assassination of Dr. Martin Luther King Jr.

Mr Jackson was with the civil rights icon as one of his aides, when he was shot and killed on a hotel balcony in Memphis, Tennessee on April 4, 1968.

“This racism is fuelled by messages of fear and violence that are propagated for political gain,” he said, and “it impoverishes, humiliates, oppresses and excludes millions of women, men and children.”

In an interview with UN News following the event, Mr. Jackson said that the student-led protests to ban rapid-fire assault weapons, following the gun rampage at a Florida high school last month, was a “watershed moment” that should be accompanied by a similar tipping point against poverty and violence overall.

He said that “too few” have too much, while “too many have too little”, and that although there was racial equality for African-Americans in principle across the US, “we don’t have economic equality and race was used to oppress us and deny us access to resources.”

UN News: Are these events focused around this UN International Decade for People of African Descent getting the attention they deserve? A decade’s a long time to try and keep the focus on this very important issue of rights.

Jesse Jackson: Well, even longer, because racism is used as a tool of oppression, a tool of division. It was a pseudoscience: whites were taught to be superior, blacks were taught to be inferior. Unfortunately, many of us learn our lessons too well. Whites are not superior; blacks are not inferior. We’re all people, measured by our environment, our attainment, our work, our effort.

UN News: What’s your overall assessment of the state of racial justice across the world today?

Jesse Jackson: We’ve seen some tremendous breakthroughs in our own country in the last 50 years, since this is the anniversary of Dr. [Martin Luther] King’s assassination. We’ve been bequeathed the right to vote, and we’ve gone from the balcony in Memphis where he was killed to the balcony at the White House where [Barack Obama] overlooked the Potomac River as President.

So, the right to vote has had some noticeable effect. In cities, mayors of cities, and the Congress and legislators, that progress has been made. On the other hand, there has been a terrible reaction to our progress the last few years led by the fearful [Donald] Trump forces; anti-racial justice, anti-gender equality forces. There’s been a kind of setback, but we’re fighting back.

UN News: Is it naïve to think that we can ever eliminate racial discrimination? Is that really an impossible dream, in a way?

Jesse Jackson: You certainly can reduce it by having effective laws to enforce. For example, there’s virtually no racial discrimination now in access to public accommodations because it’s illegal and it’s costly. The day Dr. King gave the speech in Washington, D.C. in 1963, from Texas to Florida to Maryland, we couldn’t use a single public toilet. We couldn’t rent a room. Black and brown soldiers could not sit by a Nazi prisoner of war in American military bases.

We changed that law and that changed behaviour. So, that’s virtually eliminated. Politically, we got the right to vote, but the forces that grant the right to vote never stop trying to nullify the vote that was granted in 1965. That remains the unfinished business of the struggle. As is economic justice. So, we’ve achieved a measure of scientific racial equality, but not resource equality.

On the football field, we’re dominant in the National Football League. There are 32 teams, all white owners. In major league baseball, not one black owner. And that means that if you go from picking cotton balls, to picking footballs and basketballs and to not ownership, you’ve not made progress that you deserve to make.

We should be able to control our resources, and right now, we can’t get the capital to do so. A black person with collateral cannot get the same money from a bank that a white person can get with an idea. The gap in access to resources is a huge gap.

UN News: It seems that when there is a level playing field, it’s a great struggle just to keep it level and this is true even in very developed countries like the US.

Jesse Jackson: Well, we did not get good at baseball until everybody could play. On the playing field, it’s relatively basically equal, but beyond the field, it is not – so, picking cotton was not that bad, except that we could pick cotton but we couldn’t own the land. We couldn’t take it to the gin. We couldn’t turn it into textiles. We couldn’t sell it on the international market. We could only stay at the bottom level. Same as with athletics.

UN News: Now, it’s the seventieth anniversary of the Universal Declaration of Human Rights, which recognizes the inherent dignity and equal and inalienable rights of all human beings. Why is it that this Declaration isn’t very much a front-and-centre document for humanity? I mean, the Secretary-General said yesterday that the words of that document are not matched by the facts on the ground.

Jesse Jackson: Well, they’re not because those who have privileges and advantages don’t want to give them up. I remember I went to South Africa in 1979 for the first time and I met with this bevy of press at the airport. And I trying to answer the questions in a way that would not get me kicked out of the country, so I was…

Human rights for all human beings, measured by one yardstick. That’s why I say effort, and hard work, matter. Inheritance and access matter more. In America, they have something called basketball. And in this season, in March, the colleges play ‘March Madness’ moving toward a big [final] game. And last week, there was an upset where the number 16 team beat the number one team, not by projection but on the court. The court was the same length and width, the number 16 team won the game. That can only take place when you don’t get advantages based upon – or privileges based upon – race.

UN News: Final question, if there is a failure of politicians to lead on racial justice presently, where will the leadership for change come from now? Is it time for a new, revamped, international, global civil rights’ movement?

Jesse Jackson: Well, it comes from church, it comes from […] A moral tone must be set. It comes from political leaders, it comes from a wide range of areas. It may come from students. We’ve been [plagued] for a long time by excessive violence in this country, and yet [after last month’s deadly shooting at Marjory Stoneman Douglas High School in Parkland, Florida] now the whole world is moving toward “ban assault weapons.” You never quite know when that magic mark is going to hit and take off.

UN News: Do you believe this is a watershed moment on that issue?

There must also be a watershed moment on poverty [...] too few people have got too much; too many have too little — Rev. Jesse Jackson

Jesse Jackson: I am convinced it is because Americans own 300 million guns […] eight million assault weapons. They’ve shot up schools and churches. They can shoot down airplanes. It’s too dangerous to have such weapons in a society such as ours. And so, there is a watershed moment I believe on that question. Should have been a long time ago, but it just may be now.

But there must also be a watershed moment on poverty and violence. There’s too much poverty in America. Too few people have got too much; too many have too little.

UN News: But can a coalition really be that broad in order to get, you know, to have results?

Jesse Jackson: It has to be broad but it all starts in local areas. A given area will inspire you at the local level to join a more massive coalition. It must be a massive global coalition of conscience.

We must globalize all the values that make life ‘life,’ for everybody.

♦ Receive daily updates directly in your inbox - Subscribe here to a topic.
♦ Download the UN News app for your iOS or Android devices.
Remember Slavery|people of African descent 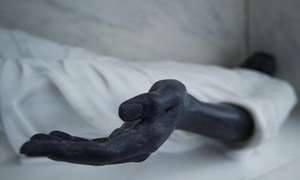 Honouring those who suffered the brutalities of the Transatlantic slave trade, United Nations Secretary-General António Guterres said the International Day set aside to remember this “epically shameful” chapter of human history is an opportunity raise awareness about the dangers of racism and prejudice today.