OCHA/Philippe Kropf
The Yemeni city of Sa’ada has been heavily hit by airstrikes since conflict in the country. Here, aid officials stand amid the rubble of a market in the old city of Sa’ada.
26 March 2018
Peace and Security

Three years after a Saudi-led coalition intervened in the Yemen war, and hours after reports that Houthi rebels fired missiles at cities in Saudi Arabia, United Nations Secretary-General António Guterres on Monday said military escalation is not the solution and urged restraint on all sides.

The UN has also dispatched an envoy to meet with warring parties in its quest to facilitate a negotiated political settlement to the crisis, which has left an estimated 22.2 million people in dire need of humanitarian assistance.

“The Secretary-General emphasizes that a negotiated political settlement through inclusive intra-Yemeni dialogue is the only way to end the conflict and address the ongoing humanitarian crisis,” Mr. Haq added.

The Former Special Envoy, Ismail Ould Cheikh Ahmed, who had been brokering talks between the parties since 2015, stepped down last month.

On 26 March 2015, a coalition of countries led by Saudi Arabia intervened militarily at the request of President Abd Rabbuh Mansour Hadi to secure the return of the Government to Sana’a, which had been seized by Houthi militias and allied units of the armed forces when the conflict initially erupted in 2014.

Three years on, the fighting is raging and the ensuing humanitarian crisis has only deepened in a country that was already one of the region’s poorest. On Sunday, missiles were fired toward Saudi Arabia.

“The Secretary-General strongly condemns the launch late yesterday of a series of missiles claimed by the Houthis toward cities in Saudi Arabia, including Riyadh, as he does consistently with all attacks against civilians,” said Mr. Haq.

Calling for restraint amid mounting tensions, the UN chief stressed that military escalation is not the solution, the spokesperson added.

“In 2017 alone, we’ve seen children continue to be killed and seriously injured at a rate of a minimum of five children every single day,” said Geert Cappelaere, UNICEF Regional Director for the Middle East and North Africa, upon returning from a field visit to Yemen to assess the impact that the brutal war and decades of chronic underdevelopment is having on 11 million Yemeni boys and girls.

“In 2017, we have seen outbreaks of deadly cholera and deadly diphtheria. Many hundreds of children have been killed as a result of that as well,” he added.

He also said that UNICEF has been able to verify that 2,500 schools today that are no longer serving for educational purposes. They were destroyed by the war or being used for military purposes, or for hosting displaced people.

“Yemen was once called ‘Arabia Felix’ – happy Arabia – but there is not much happiness there today. Happiness will only come back to Yemen, if we invest in children, stop the brutal war and invest in education,” he said.

Since the uprisings in Yemen broke out in early 2011, the UN has been engaged in helping Yemenis to find a peaceful solution. 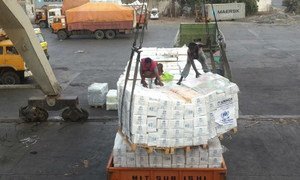 The Security Council has urged warring parties in Yemen to allow humanitarian convoys to safely reach all conflict-affected governorates without hindrance, while also asking that all Yemen’s ports remain fully open to commercial and relief supply imports.