One month after a powerful earthquake hit Papua New Guinea, the United Nations warns that “children’s lives are in danger” as access to the affected remote and isolated villages across vast and rugged terrain remains a huge challenge.

According to the Government, an estimated 270,000 people are still in need of urgent assistance, including 125,000 children, in the wake of a 7.5 magnitude earthquake on 26 February that killed at least 100 people and injured many more in landslides and collapsing houses across four remote provinces of the Pacific island nation.

Children’s lives are in danger. With limited access to basic necessities, families are struggling to survive in crowded shelters, or to rebuild homes and food gardens.

“Children’s lives are in danger,” said Karen Allen, UN Children’s Fund (UNICEF) Representative for the country. “With limited access to basic necessities, families are struggling to survive in crowded shelters, or to rebuild homes and food gardens.”

To date, UNICEF has already delivered 12,000 packets of therapeutic food and enough vaccines to protect 31,700 children against the increasing risk of disease outbreak and malnutrition.

UNICEF is working with the Government and partners to ensure humanitarian supplies are distributed to affected communities as quickly as possible. UN Population Fund (UNFPA), World Health Organization (WHO) and UN Women are also on the ground.

UNICEF needs $14.6 million to provide humanitarian assistance to children and families affected by the earthquake over the next nine months.

The island nation, on a volatile seismic fault system, has been experiencing a spark of activity, with the latest strike by a 6.6 magnitude quake several hours ago, according media reports.

The Sendai Framework for Disaster Risk Reduction 2015-2030, adopted at the UN World Conference in Sendai, Japan, in March 2015, aims to substantially reduce global disaster mortality and the number of affected people by 2030. 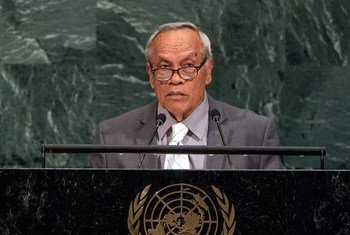