UN Photo/Violaine Martin
Journalists at a press stakeout. Recently, there has been a noticeable increase in harassment of journalists, with women bearing the brunt of online attacks.

Over the past 15 years there has been “a marked increase” in cyber harassment, making the safety of women journalists a major issue for reportage in today’s digital era, participants highlighted Thursday at a United Nations event.

“In Slovakia we see the murder of an investigative journalist, with his fiancé murdered alongside him,” so not only were women journalists in danger, but women in general, according to Alison Smale, the head of UN global communications.

She made this chilling observation during an event held on the side lines of 62nd UN Commission on the Status of Women (CSW), which has been running at UN Headquarters in New York since last week and will wrap up on 23 March.

The UN Educational, Scientific and Cultural Organization (UNESCO) convened the panel discussion, entitled Safe Journalists, Strong Democracies: How on and offline attacks on women journalists are hurting us all, drawing attention to numerous ways women journalists can be placed in vulnerable settings – in the workplace, the field and online – leaving them open to harassment, intimidation and violence.

Calling the Slovakia incident “absolutely grotesque,” the UN Under-Secretary-General for Global Communications, herself a former journalist, recognized the “huge value of the UN, which pledges to discuss and try to deal with everything, for example, “a workshop like this.”

Chairing the event, Guy Berger, UNESCO Director of Freedom of Expression and Media Development, highlighted the UNESCO World Trends in Freedom of Expression and Media Development report, which with a special focus on gender equality in the media provides an essential perspective to understand the changing global media landscape.

On a upbeat note, he displayed one chart showing that the number of States responding to UNESCO’s request for more information on the judicial follow-up of journalists’ killings went from 30 to 75 per cent, showing progress that Governments are becoming increasingly more sensitized.

“Unfortunately,” he said, “you still have only one out of 10 cases of killings of journalists being resolved.”

Under the framework of the UN Plan of Action on the Safety of Journalists and Issue of Impunity, panellists shared their first-hand experiences of these threats and consequences on the press’ fundamental role in strengthening democratic societies.

“With technology and social media, women are targeted” online more than men, she said, elaborating that a Rappler study in the Philippines of online, State-sponsored hate revealed that the Government aimed to stifle any type of dissent.

She spoke about weaponized propaganda and gender-charged attacks against her and other female journalists there.

“The only defense we’ve had is to shine a light” on the attacks with a “frequency that only technology allows,” said Ms. Ressa, adding that the day after running an expose showing the data, “I received for one month exactly […] an average of 90 hate messages per hour.”

Another panelist, Matthew Caruana Galizia, Pulitzer prize-winning journalist, spoke about his mother, Daphne Caruana Galizia, a Maltese journalist who had 57 defamation cases against her when she was assassinatied in October 2017.

Mr. Caruana Galizia emphasized the need hold to accountable, stressing “There has to be a cost for the perpetrator that is greater than the life of a journalist.”

“After you continue fighting back and they see that the verbal threats do not work, they move on to legal threats, violence and ultimately murder. We want justice for the assassination of Daphne Caruana Galizia and justice for the crimes she reported on state corruption”, he underlined.

For her part, Jennifer Clement, Mexican-American author and the first woman President of PEN International, drew parallels between the situations of women writers and journalists, and the hostility with which social systems often regard a woman ‘who walks by herself.'

Ms. Clement presented the PEN International Women’s Manifesto  – a set of principles that aim to protect freeexpression  – to combat the silencing of women writers. 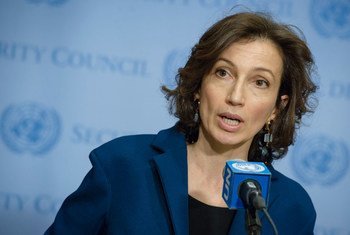 UNESCO chief calls for investigation into killing of Nigerian photographer

28 November 2017
The head of the United Nations agency defending press freedom on Tuesday denounced the killing of a Nigerian photographer, calling for an investigation into the incident.