OCHA/Meridith Kohut
This young mother walked 20 days from Diinsoor, Somalia, with her seven children to Hagadera refugee camp in Dadaab, Kenya. After her husband’s livestock died because of the drought in Somalia, he sent her to Dadaab because he was unable to feed them. (file photo)
22 March 2018
Humanitarian Aid

Driven largely by climate disasters and conflict, levels of acute hunger surged in 2017, leaving some 124 million people across 51 countries facing hunger crises –11 million more than the previous year, according to a new United Nations report.

“Reports such as this give us the vital data and analysis to better understand the challenge. It is now up to us to take action to meet the needs of those facing the daily scourge of hunger and to tackle its root causes,” said Secretary-General António Guterres in a video message on the report.

Presented by the UN Food and Agriculture Organization (FAO), the UN World Food Programme (WFP) and the European Union at a briefing Thursday, the Global Report on Food Crises finds that food emergencies are increasingly determined by complex causes such as conflict, extreme climatic shocks and high prices of staple food – often acting at the same time.

“We must acknowledge and address the link between hunger and conflict if we are to achieve zero hunger,” said José Graziano da Silva, FAO Director-General.

The report points out that conflict continued to be the main driver of acute food insecurity in 18 countries – 15 in Africa or the Middle East – accounting for 60 per cent of the global total.

The increase is largely attributable to new or intensified conflict and insecurity in Myanmar, north-east Nigeria, the Democratic Republic of Congo, South Sudan and Yemen.

“The fighting must stop now and the world must come together to avert these crises often happening right in front of our eyes,” underscored David Beasley, WFP Executive Director.

We must acknowledge and address the link between hunger and conflict if we are to achieve zero hunger
— José Graziano da Silva, FAO Director-General

The report finds that food crises are increasingly determined by other complex causes as well, such as extreme climatic shocks and high prices of staple food – often acting at the same time.

“The consequences of conflict and climate change are stark: millions of more people severely, even desperately, hungry,” maintained Mr. Beasley.

The report also flags that entire communities and more children and women are in need of nutritional support compared to last year, indicating the need for long-lasting solutions to revert the trend.

Moreover, it highlights the urgent need for simultaneous action to save lives, livelihoods and to address the root causes of food crises.

The report, which brings together regional and national data and analysis from multiple sources, demonstrates that in addition to critically needed humanitarian aid, development action needs to engage much earlier so as to tackle the root causes of extreme vulnerability, therefore, building resilience.

“This Global Report on Food Crises shows the magnitude of today’s crises but also shows us that if we bring together political will and today’s technology, we can have a world that’s more peaceful, more stable and where hunger becomes a thing of the past,” Mr. Beasley concluded.

Maps with interactive data from the report can be found here.

♦ Receive daily updates directly in your inbox - Subscribe here to a topic.
♦ Download the UN News app for your iOS or Android devices.
agriculture and food security|climate change 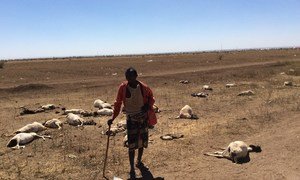 Below-average rains forecast for Somalia could lead to devastating cattle losses and intensify malnutrition in the Horn of Africa nation, the United Nations food security agency has warned.