UNICEF/Sanadiki
On 15 March 2018 families in Beit Sawa in Syria’s Eastern Ghouta, wait in a building for buses that will take them to the evacuation exit set up in Hamourieh, Eastern Ghouta.
20 March 2018
Humanitarian Aid

The humanitarian crisis in Syria is reaching new peaks as hundreds of thousands of people flee the escalating fighting in Eastern Ghouta and Afrin, the latest flashpoints in the long-running conflict, United Nations relief agencies said Tuesday.

In the northern Afrin region, he added, an estimated 104,000 people have been uprooted from their homes by the latest escalation in fighting.

As the conflict in Syria enters its eighth year, the situation unfolding in these flashpoints has become a matter of grave concern for the UN.

The Office of the UN High Commissioner for Refugees (UNHCR) said the newly displaced people from east Ghouta are currently sheltering in rural Damascus but the existing accommodation facilities are extremely congested and overcrowded and lack basic sanitation as the needs are growing by the hour. There are also serious health risks.

In addition, hundreds of thousands of civilians are still trapped in east Ghouta and in dire need of aid.

“UNHCR and its partners have been working around the clock to provide life-saving assistance,” Mr. Mahecic said, noting that so far 180,000 core relief items, such as mattresses, high thermal blankets, plastic sheets, winter clothes kits, solar lamps, jerry cans, and kitchen sets, have been delivered.

In the country’s northwest, UNHCR has scaled up its response to the Afrin crisis, delivering 100,000 core relief items in the last two days.

Some 75,000 are sheltering in Tal Rifaat, while another 29,000 have sought safety in Nubol and Zahraa and surrounding villages in northern rural Aleppo. In addition, some 10,000 people are reportedly stranded at Az-Ziyara.

“A UNHCR team was on the ground in Nubol yesterday where they heard stories of their exhausting journey, walking long hours through the mountains,” Mr. Mahecic said.

The UN Children’s Fund (UNICEF) is also responding to the crises in Afrin and east Ghouta.

“It is now 20 days since we were last able to deliver health and nutrition supplies to Afrin district,” said UNICEF spokesperson Marixie Mercado in a briefing to the media in Geneva.

The source of water to Afrin city was reportedly damaged by fighting. UNICEF-supported trucks, however, have not been able to deliver much-needed safe water to vulnerable areas in the city since March 15 due to the escalation of violence.

Despite many challenges at the shelters, “there is a palpable sense of relief – especially among the children,’ she said, noting that they arrive hungry and exhausted, but the sound of their laughter fills the yards of the shelters.

The children said how much they wanted to go back to school, and described how, when schools would open in eastern Ghouta, they would go to their classes at 5 a.m., before the sun was out, and return at 8 a.m., before the fighting started.

UNICEF is also concerned about the thousands of those who remain inside Afrin and besieged locations in eastern Ghouta.

She said UNICEF had initially planned to meet the needs of 50,000 people, but are now preparing to cover around 200,000 people from east Ghouta, including those inside the besieged areas.

“The siege of Eastern Ghouta by the Syrian Government forces, half a decade long, has involved pervasive war crimes, the use of chemical weaponry, enforced starvation as a weapon of warfare, and the denial of essential and life-saving aid – culminating in the current relentless, month-long bombardment of hundreds of thousands of terrified, trapped civilians,” he said.

“In the city of Afrin, which was captured by Turkish forces yesterday, scores of civilians have been killed and injured due to airstrikes, ground-based strikes, and explosive hazards, and thousands have been displaced,” he added.

♦ Receive daily updates directly in your inbox - Subscribe here to a topic.
♦ Download the UN News app for your iOS or Android devices.
syria|East Ghouta|Afrin 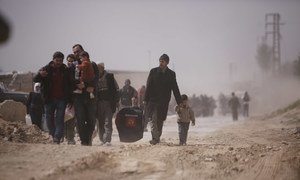 The United Nations in Syria is appealing urgently for help to ease the catastrophic situation for tens for thousands of people impacted by fighting in Eastern Ghouta, outside Damascus, and the northern town of Afrin.