UNICEF/Sanadiki
On 15 March 2018 in Beit Sawa, eastern Ghouta. families walk towards Hamourieh where an evacuation exit from Eastern Ghouta has been opened.

The United Nations in Syria is appealing urgently for help to ease the catastrophic situation for tens for thousands of people impacted by fighting in Eastern Ghouta, outside Damascus, and the northern town of Afrin.

Having seen first-hand the desperate conditions of people from east Ghouta and Afrin, who are tired, hungry, traumatized and afraid, we need to provide them with urgent aid,” Ali Al-Za’tari, UN Resident and Humanitarian Coordinator in Syria, said Monday.

“These civilians are facing harrowing humanitarian conditions,” he continued. “Many remain trapped by conflict inside East Ghouta and Afrin. All are in desperate need.” The fighting in both places has killed hundreds of civilians in the past month and displaced tens of thousands.

Insecurity and fierce hostilities continue to endanger the people of East Ghouta, which UN Secretary-General António Guterres has referred to as “hell on earth.”

Most of those interviewed had some health conditions, likely due to years of lacking medicine and health care.

Meanwhile, nearly 100,000 people have been displaced by hostilities in Afrin District. The majority, some 75,000 people, have fled to Tal Refaat and the remainder to Nubul, Zahraa and surrounding villages.

Since 11 March, some 25,000 people have reportedly left East Ghoutam and on a daily basis UN teams have been visiting Dweir, Adra and Herjelleh in Rural Damascus where they are sheltering. All of these sites are well over capacity, with more people continuing to arrive on a daily basis.

“We appeal to Member States to provide much needed supplies and funding,” underscored Mr. Al-Za’tari.

The UN and its partners, notably through the tireless efforts of the Syrian Arab Red Crescent, are fully mobilized to deliver aid on the spot.

“We appeal to all parties to facilitate access to all people in need; and to protect civilians, medical workers, service providers and humanitarian workers,” he concluded. 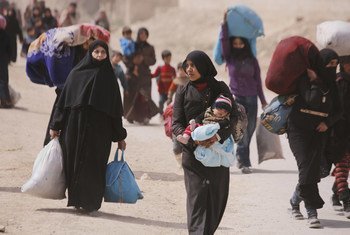 The United Nations mediator for the Syrian conflict told the Security Council on Friday that its three-week old demand for a ceasefire across the war-ravaged country was still not being implemented, and while progress had been made in Douma in Eastern Ghouta, “the bottom line is, too many civilians are still suffering.”