UNHCR/Ezzat Habib Chami
New refugees, most women and children fleeing a recent flare up in violence in the northwest of the Central African Republic (CAR) in Chad.
16 March 2018
Humanitarian Aid

Thousands of refugees who have fled violence in the Central African Republic (CAR) to Chad are facing food and shelter shortages, the United Nations refugee agency said Friday, warning that this is the largest influx in four years into the small landlocked country.

“The worry and real risk is that food shortages for the entire population over the next month may have devastating consequences,” Babar Baloch, spokesperson for the Office of the UN High Commissioner for Refugees (UNHCR), told the regular press briefing in Geneva, where he said that some $149 million is required to meet the urgent needs.

“Since last December, more than 15 Central Africans refugees have been killed on both sides of the border and at least 67 have suffered sexual and gender based violence while trying to go back to CAR to gather food and their scarce resources in exile,” he said.

UNHCR and partners have been providing life-saving relief such as healthcare, water and sanitation, shelter, food and nutrition assistance to newly arrived refugees since the start of the crisis.

Severe floods have not only affected harvest, but they also posed an urgent need for accommodation.

Therefore, UNHCR is building emergency shelter in the camps and villages that host them, while also working with the authorities, partners and donors on a relocation plan.

More mobile clinics are also urgently needed and local health centres must be strengthened to ease the heavy toll taken by respiratory infections, malaria and other diseases.

Southern Chad, including Goré, one of poorest and most underdeveloped parts of the country, is already hosting some 43,000 Central African refugees and 45,000 Chadian returnees from CAR. It is now struggling to cope with an additional influx of 22,180.

♦ Receive daily updates directly in your inbox - Subscribe here to a topic.
♦ Download the UN News app for your iOS or Android devices.
chad|refugees 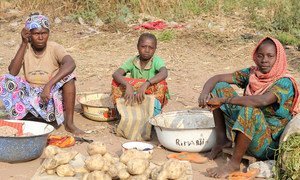 A senior United Nations aid official has called for urgent funding to support 4.4 million people in Chad, including refugees, returnees and internally displaced persons, as well as the communities hosting them.