Secretary-General António Guterres on Thursday called on the international community to generously support the activities of the United Nations Relief and Works Agency for Palestine Refugees in the Near East (UNRWA), which is facing “the worst financial crisis in its history.”

Addressing the Extraordinary Ministerial Conference Preserving Dignity and Sharing Responsibility: Mobilizing Collective Action for UNRWA, Mr. Guterres noted that the Agency is facing a $446 million shortfall in 2018, asking donors to respond to the Palestinian people’s plight and “translate their dreams into tangible improvements in their lives.”

“That is precisely what UNRWA does every day with such steadfastness, not only in Gaza but in the camps, communities and countries across the region that host Palestinian refugees,” he stressed, emphasizing the urgency to support and protect the vulnerable.

He warned that if the response is not met, “critical services could be reduced or eliminated entirely – from schools to sanitation, from medicine to microfinance to food security for some 1.7 million refugees in abject poverty or affected by conflict.,”

The UN chief pointed out that until a lasting solution to the Israeli-Palestinian conflict is achieved, the work of UNRWA remains “just as crucial as it was sixty-eight years ago.”

“By keeping half a million children in school and millions of people healthy and nourished,” he said, “UNRWA is contributing to stability in the occupied Palestinian territory, as well as in Jordan and Lebanon – and has  undertaken extraordinary efforts to support Palestinians who have suffered as a result of the tragedy in Syria.”

“UNRWA is an asset to the international community that we must protect and support,” he told the donors.

Without a collective solution Mr. Guterres affirmed that UNRWA would soon run out of money. He argued against this, drawing attention to then need for high-level action in the form of cash.

“It is far more grave, and threatens to cut programmes far more savagely,” he said, adding that this could push the suffering in disastrous and unpredictable directions.

Mr. Guterres appealed for increased support now and in the years ahead to ensure schooling, health care and food assistance.

“Such spending is an investment with wide-ranging dividends – in the human development of the Palestinian people, in stability today and in a peaceful future in and beyond Palestine,” he explained, adding that it could also address some of the despair and other factors that lead to radicalization.

Moreover, according to the UN chief, meeting the appeal would send a strong message to Palestine refugees that the international community is committed to their rights, their well-being, and meeting their daily needs.

“To those who may question the expense, let me echo UNRWA’s fundraising campaign: Dignity is priceless,” he pressed.

“As a matter of human solidarity, and as a matter of smart steps for peace, let us give UNRWA our full and generous support,” concluded the Secretary-General.

♦ Receive daily updates directly in your inbox - Subscribe here to a topic.
♦ Download the UN News app for your iOS or Android devices.
Palestinian|refugees 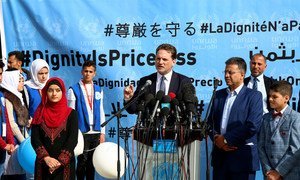 The United Nations Relief and Works Agency for Palestine Refugees in the Near East (UNRWA) launched on Monday a global fundraising campaign to sustain resources for its education, health and other assistance programmes.