The United Nations Security Council on Thursday renewed the mandate of UN peacekeeping mission in South Sudan for another year and demanded that all parties immediately end the fighting countrywide.

With the unanimous adoption of a resolution on the mandate extension until 15 March 2019, the UN Mission in South Sudan (UNMISS) is charged with performing such tasks as protecting civilians, creating the conditions conducive to the delivery of humanitarian assistance, monitoring and investigating human rights violations, and supporting the peace process.

The Council decided to maintain the overall force levels of UNMISS with a troop ceiling of 17,000 troops, which includes a Regional Protection Force at levels to be set by the Secretary-General but not exceeding 4,000, and maintaining the ceiling of 2,101 police personnel, including individual police officers, formed police units and 78 corrections officers.

The 15-member body also demanded that all parties immediately end the fighting across the country, and further demanded that national leaders abide by the ceasefires agreed on 11 July 2016 and 22 May 2017, as well as the truce signed on 21 December 2017.

South Sudan attained independence from Sudan in July 2011 after a referendum, becoming the world’s newest country. The Security Council established UNMISS to support the transition, having determined that the situation faced by South Sudan continued to constitute a threat to international peace and security in the region.

The country has since faced ongoing challenges due to a political face-off between two rival factions that erupted into full blown conflict in December 2013. The crisis has produced one of the world’s worst displacement situations with immense suffering for civilians.

♦ Receive daily updates directly in your inbox - Subscribe here to a topic.
♦ Download the UN News app for your iOS or Android devices.
South Sudan|UNMISS 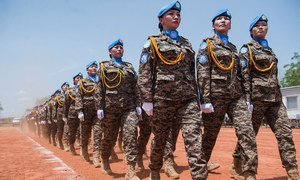