UNICEF/Souliman
A five year-old boy carries an empty water jerry in Al-hol camp in north-eastern Syria, hosting over 4,600 Iraqi refugees. Like most children there, he bears the brunt of carrying water for his family.
13 March 2018
Human Rights

More than 900 children in Syria were killed last year, making 2017 the deadliest year for children in the country’s ongoing conflict, a senior United Nations official told the Geneva-based Human Rights Council on Tuesday, warning that the grim statistics may only be the tip of the iceberg.

“In 2017, documentation of violations of children’s rights during the conflict – by all sides – was the highest since the beginning of the conflict. Simply put, 2017 was the deadliest year of the Syrian war for children,” Mr. Moumtzis told the Council.

The Syria Monitoring and Reporting Mechanism verified that in 2017 alone, at least 910 children killed and 361 injured, the large majority of child casualties occurring in Idleb, Aleppo and Deir-ez-Zor, and other locations.

“There is a child and a grieving family behind every single one of these numbers. Verification of additional cases continues and these numbers only provide the tip of the iceberg of the actual case and scale of violence suffered by children in Syria.”

The UN estimates that overall, 400,000 people have been killed in Syria, and more than a million injured.

The fighting has also pushed more than five million Syrians across the border to neighbouring countries such as Lebanon and Jordan, as well as to Europe and beyond.

Mr. Moumtzis reported that children make up over 40 per cent of the 13.1 million people inside Syria who require life-saving humanitarian assistance.  And of the more than five million across the country who are in acute need, 663,000 are under the age of five – a figure he described as “shocking.”

The UN humanitarian official also expressed deep concern over continued reports of the recruitment and use of children in the fighting by all sides.

“In 2017, 25 per cent of cases involved boys and girls under the age of 15 – of course considered a war crime and prohibited under international humanitarian law,” he said.

“Nine out of 10 recruited children served in a combat role: in uniform, armed and with military training. Growing up in conflict, they may have little choice or alternative; they may also have no way out, as killing or detention by the other side may await them.”

“The scale, scope and gravity of crimes committed against children are shocking. Widespread human rights violations and violations of international humanitarian law affecting or targeting children are being committed by the Syrian authorities. And perpetrated too by armed groups,” she stated.

“Children are arrested and detained for their family’s alleged association with opposing armed forces. Girls, in particular, are subjected to sexual violence, including rape, forced marriage and sexual slavery by armed groups.”

She recalled that the Syrian conflict began with, in her words, “the denigration of a child” whose “tragic fate” became a rallying call for scores across the country.

Hamza Ali Al-Khateeb, 13, had been detained during protests in the city of Daraa in April 2011. His brutalized body was returned to his family a month later.

Ms. Gilmore said the years of unending fighting means millions of Syrian children have been denied their fundamental human rights and robbed of their childhood.

She concluded her remarks with a warning to the warring parties and their supporters:

“Those responsible for this violence – within Syria and beyond – should know that they are being identified; that dossiers are being built up for their prosecution; and that, with evidence in hand, and before duly convened tribunals, they will be held legally accountable for those crimes that with malice, indifference and great cruelty they continue to wage with scant regard for Syria’s children,” she stated. 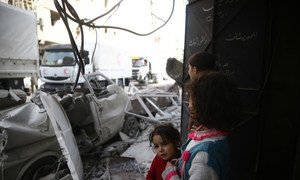 The United Nations and partners on Friday reached the Syrian city of Douma in Eastern Ghouta to complete distribution of food aid after intense shelling cut short deliveries to the war-torn enclave earlier this week.