Ahead of rainy season, UN under ‘time pressure’ to deliver aid in South Sudan

Ahead of rainy season, UN under ‘time pressure’ to deliver aid in South Sudan

With the rainy season approaching in South Sudan, where one in three people has been displaced by more than four years of conflict, a senior United Nations humanitarian official has called for urgent financial support to distribute and preposition life-saving aid supplies.

“Due to seasonal time pressure, we need early funding now to reach millions of people with multi-sectoral assistance during the dry season, through road transport and prepositioning of life-saving aid supplies,” said Alain Noudehou, the Humanitarian Coordinator in the African country, in a press release issued over the weekend by the UN Office for the Coordination of Humanitarian Affairs (OCHA).

He said that rain would make the condition of roads difficult for transporting aid supplies and that airlifts would cost many times more than ground transport.

A recent report analyzing food security – access to adequate food – projected that more than seven million people, or almost two-thirds of South Sudan’s population, could become severely food insecure between May and July without sustained humanitarian assistance and access.

We need early funding now to reach millions of people with multi-sectoral assistance during the dry season.

Mr. Noudehou’s statement came after a high-level delegation of donors, heads of humanitarian agencies and partners visited Leer in the Unity region of the country's north to see first-hand the plight of the 90,000 people living there.

The delegation met with the Governor of Leer, community leaders and aid agencies who are currently assisting tens of thousands of people across the region.

Leer was one of two counties affected by famine in 2017. Although the famine was stopped due to intensive humanitarian intervention, the situation remains fragile with about 85 per cent of the population predicted to reach crisis and emergency food insecurity conditions by the end of April.

South Sudan attained independence from Sudan in 2011, but a political face-off between two rival factions plunged the world’s newest country into full blown conflict in December 2013.

“Once again, I strongly urge all parties to the conflict to stop the fighting and to ensure that humanitarian agencies are given free, safe and unhindered access to all areas of South Sudan, and for all bureaucratic impediments to be removed,” said Mr. Noudehou. 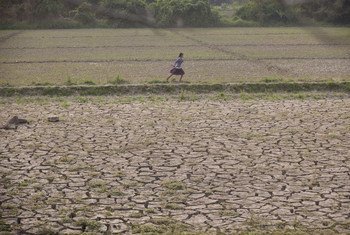