UN Photo/Loey Felipe
Leila Zerrougui, Special Representative and Head of the UN Stabilization Mission in the Democratic Republic of the Congo (MONUSCO), briefs the Security Council.

Noting that this brought increased risks for renewed instability in many parts of the country, and posed serious threats to the civilian population, she stated that the DRC continues to face one of the world's most serious humanitarian crises.

“There is no other way of saying it – the humanitarian situation in the Democratic Republic of the Congo is shocking,” she lamented, pointing out that the number of internally displaced persons in need of humanitarian assistance has become the highest in Africa.

Ms. Zerrougui condemned the persistent attacks by armed groups across the country, the recruitment of children, the rape of women and young girls, the burning of houses and the desecration of places of worship.

She encouraged the Council to consider how the security situation could be stabilized and the political and electoral process best supported – in line with the 31 December 2016 agreement for a peaceful political transition.

“A failure to generate confidence in the full and faithful implementation of the 31 December agreement will only serve to heighten political tensions, and to fuel the risks of inciting violence for political ends,” she underscored.

She assured the Council that during these times of simmering tensions, the UN Mission remains “steadfast in its commitment to support the Congolese authorities to protect those most vulnerable, and most affected, by acts of violence.”

Ms. Zerrougui also expressed her concern over the disproportionate use of force by security services during recent demonstrations, saying that the Government should investigate and take appropriate measures.  During those protests, which began at the end of last year, nearly two dozen people were reportedly killed, more than a hundred were wounded and some 200 were arrested.

Moreover, she pointed to the need to restore confidence in the political process, including through the release of political prisoners.

The Special Representative also highlighted the progress made in preparing for the presidential and legislative elections in the country and paid homage to the determination of the Congolese people to participate in the political process. 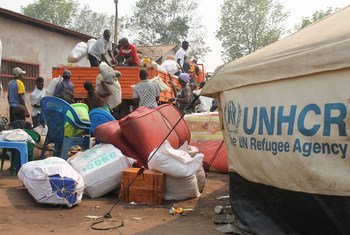 The United Nations refugee agency warned Tuesday that ongoing instability in the Kasai region of the Democratic Republic of the Congo (DRC) poses a grave risk to civilian safety, including for several hundred refugees recently returned there from Angola.