Despite notable progress on closing gender gaps over the past 20 years, women have less access to jobs, are more likely to take low-quality employment, and face barriers to management positions, a United Nations labor report has found.

The women’s labour force participation rate worldwide stands at 48.5 per cent in 2018, 26.5 percentage points below that of their male counterparts, according to the World Employment and Social Outlook: Trends for Women 2018 – Global snapshot, released Wednesday on the eve of International Women’s Day.

The report, authored by the UN International Labour Organization (ILO), also shows that the global unemployment rate for women is six per cent for 2018, about 0.8 percentage points higher than that for men.

Altogether, for every 10 men in a job, only six women are employed.

“Despite the progress achieved and the commitments made to further improvement, women’s prospects in the world of work are still a long way from being equal to men’s,” said Deborah Greenfield, ILO Deputy Director-General for Policies.

“Whether it is about access to employment, wage inequality or other forms of discrimination, we need to do more to reverse this persistent, unacceptable trend by putting in place policies tailored to women, also taking into account the unequal demands that they face in household and care responsibilities,” she added.

In regions such as the Arab States and Northern Africa, female unemployment rates are still twice as large as men’s, with prevailing social norms continuing to obstruct women’s participation in paid employment.

Women also face significant gaps in the quality of the employment they are in.  They are more than twice as likely to be contributing family workers. This means that they contribute to a market-oriented family business, but are often subject to vulnerable conditions of employment without written contracts, collective agreements and respect for labour legislation.

As a result, women are still overrepresented in informal employment in developing countries.
The report notes that globally, four times as many men are working as employers than women in 2018.  Women continue to face barriers in accessing management positions.

“Closing gender gaps in the world of work thus should remain a top priority if we want to achieve gender equality and empower all women and girls by 2030,” concluded Damian Grimshaw, Director of the ILO Research Department.

♦ Receive daily updates directly in your inbox - Subscribe here to a topic.
♦ Download the UN News app for your iOS or Android devices.
gender gap|employment 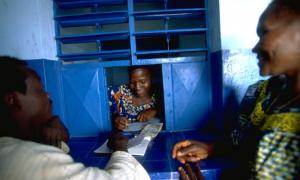