The impact of the Governments’ commitment is evident through an increase in the number of seizures, greater cooperation and innovative judicial solutions, says Pierre Lapaque, the regional head for West and Central Africa at UNODC.

“UNODC has witnessed positive systemic change in the region in the past years. We are seeing an increase in national and regional ownership, which positively impacts the security situation in the Sahel,” he highlighted.

According to the UN agency, for 2017 alone, law enforcement officers based in the airports of Bamako (Mali), Niamey (Niger) and Ouagadougou (Burkina Faso) have seized over 35 kilograms (77 pounds) of drugs and over $1 million in foreign currencies.

Just two weeks ago, in early February, Joint Airport Interdiction Task Force agents in Ouagadougou proceeded to the seizure of 4.8 kg of heroin, off a single passenger.

On the judicial side as well as, Government efforts are yielding results. Last year, Niger secured its first two convictions for terrorist financing involving eight suspects, and a third conviction for participation in terrorist acts, involving one suspect.

Supported by UNODC, Governments are also making strides in the battle against corruption.

Burkina Faso, Mali, Mauritania and Niger have already ratified the UN Convention against Corruption, and Chad is currently taking steps towards ratification.

In addition, anti-corruption laws are being developed in countries and increasingly more number of cases are being investigated and transferred to justice systems.

Furthermore, strong respect for human rights and gender equality are the fundamental underpinnings of its assistance programmes, affirmed UNODC.

Since 2014, UNODC’s Sahel Programme has reached over 10,000 direct beneficiaries through the implementation of more than 400 activities ranging from legislative assistance to the provision of equipment, or from practical training workshop to high-level meetings, both at national and regional levels.

During this time, UNODC has also forced close cooperation and coordination with a wide range of partners, including UN missions, the G5 Sahel, European Union, the Civil Society and others. The Programme also complements the UN Integrated Strategy for Sahel (UNISS) by building on the progress already made in the past years, and by realigning the UNISS’ objectives with 2030 Agenda 2030 and the SDGs.

“We make a point of getting our partners as involved as possible, to ensure that our Programme meets their needs, their objectives and their priorities,” expressed Mr. Lapaque.

♦ Receive daily updates directly in your inbox - Subscribe here to a topic.
♦ Download the UN News app for your iOS or Android devices.
sahel|criminal justice|drugs 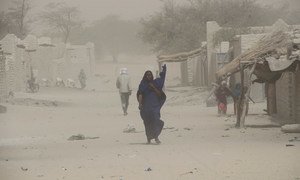 The United Nations and its partners met in Brussels, Belgium, on Friday to strengthen support for a group of five nations in Africa’s troubled Sahel region which are facing pressing challenges including extreme poverty, food and nutrition crises and violent extremism.