OCHA/Naomi Frerotte
In Chad, women sell vegetables at an informal market inside the returnee site.

A senior United Nations aid official has called for urgent funding to support 4.4 million people in Chad, including refugees, returnees and internally displaced persons, as well as the communities hosting them.

Assistant Secretary-General for Humanitarian Affairs and Deputy Emergency Relief Coordinator Ursula Mueller made the appeal on Tuesday at the end of her first visit to the landlocked country, located in central Africa.

Ms. Mueller underscored the need for durable solutions to the crisis in the Lac region.

The activities of the extremist group Boko Haram, as well as violence in Sudan and the Central African Republic, have affected 500,000 people there, including 137,000 people the UN has deemed particularly vulnerable.

“During my visit to displacement sites, I saw the difficult living conditions and lack of means displaced communities face,” Ms. Mueller said.

“It is unacceptable that these men, women and children who have lost everything, their home, belonging, livelihood and very often family members, continue to live in fear and uncertainty.”

Chad was the final stop on a 10-day mission which also took Ms. Mueller to the Central African Republic (CAR) and Cameroon, where she saw see first-hand the devastating humanitarian consequences of ongoing violence.

The humanitarian emergency across the Lake Chad basin is among the most severe in the world, according to the UN humanitarian affairs office, OCHA, where Ms. Mueller is second in command.

OCHA said the closure of Chad’s border with Nigeria from the beginning of the crisis in the Lac region in 2015, together with the continued implementation of emergency measures, have also had an impact on local populations who already face poor regional development.

Ms. Mueller said she was moved by the solidarity of host communities who are sharing the little they have with those forced to run for their lives.

“It is essential to strengthen the livelihoods of these communities who are the first lifeline for those fleeing violence and insecurity,” she stated.

The crisis is taking place against a wider backdrop of recurrent food shortages and entrenched poverty across Chad, where nearly four million people require emergency food assistance and more than 200,000 children under five are at risk of dying from severe acute malnutrition.

However, funding for humanitarian operations there has not kept pace with increased needs.

Ms. Mueller urged countries to step up their support to Chad, which requires $544 million in humanitarian funding this year.

So far, less than four per cent has been received. 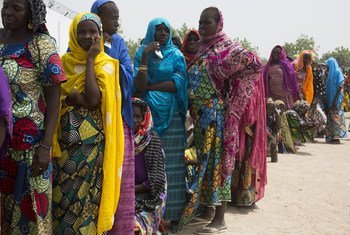 With more than a quarter of a million people affected by the Boko Haram insurgency in the Lake Chad Basin region, the United Nations refugee agency and its humanitarian partners launched on Wednesday an inter-agency funding appeal for $157 million.