A destructive pattern of zero-sum politics has plunged Yemen into ever deeper poverty and desolation, the United Nations envoy for the war-torn country said Tuesday, emphasizing that while the UN and the wider international community can try to bring about a favourable environment for a path to peace, Yemeni decision-makers must stop the fighting and bloodshed.

“Conflict has gradually destroyed the economy, healthcare services, housing, roads and schools – everything that Yemenis need in order to live and prosper,” said the UN Special Envoy for Yemen, Ismail Ould Cheikh Ahmed, briefing the Security Council a final time before he steps down at the end of the month.

“I call on the parties to cease hostilities, reactivate negotiations aimed at a peaceful settlement,” he urged.

Mr. Ould Cheikh Ahmed said the country was already embroiled in conflict when he took up his post in April 2015, and he said that as the conflict deepened, so did the socio-economic misery, making Yemen the world’s largest man-made humanitarian crisis, which has claimed thousands of lives and driven many times more from their homes.

Across the country, more than three-fourths of the population – over 22 million persons are in need of humanitarian assistance, including more than 8.4 million who are severely food insecure.

Prices of essential commodities in the country have skyrocketed, the value of the currency has dwindled, salaries have not been paid in months and in some cases, years, and the country’s health, water and sanitation, basic services and education system are in tatters, with money which could have been used to maintain such services and stimulate economy being used to fund the war.

Worst affected are Yemen’s women, who remain at a heightened risk of sexual and gender-based violence and have seen their rights “shrink by the day,” added Mr. Ould Cheikh Ahmed.

“I heard many Yemeni women saying that they ‘live in a big prison’ where their freedom of speech is restricted. Those who do speak up face a constant threat of persecution and violent attempts to silence them,” he expressed.

The UN Special Envoy concluded by saying that a roadmap for peace in Yemen exists but the parties to the conflict need to build confidence among themselves and launch it.

“The only part missing is the commitment of parties to make concessions and give priority to the national interest,” he said, wishing Martin Griffiths – a seasoned former diplomat and humanitarian worker, appointed by the UN Secretary-General as his new Special Envoy for Yemen – every success in his efforts.

UN Photo/Manuel Elías
John Ging, Director of Operations at the UN Office for Coordination of Humanitarian Affairs (OCHA) briefs the Security Council on the situation in Yemen.

Also briefing the 15-member Security Council today, John Ging, the Director of Operations at the UN Office of the Coordination of Humanitarian Affairs, also underscored that an end to hostilities and “meaningful” engagement of the parties is vital to ensure a lasting political solution.

However, until that happens, humanitarian response is critical to save lives.

“Securing full funding for [the $2.96 billion Yemen Humanitarian Response Plan] is a top priority,” he said, noting that the Central Emergency Response Fund recently allocated $50 million to humanitarian efforts in the country.

Mr. Ging also underscored the need to ensure unhindered, safe and secure humanitarian access into as well as within the country to allow resources be delivered to those in need. At the same time, allowing and maintaining free flow of commercial imports is imperative, as is ensuring that Government employees and civil servants are paid their salaries.

“Finally, it remains important to emphasize that protection concerns remain at the centre of the response,” urged the senior UN aid official, reiterating that all parties to the conflict are obligated to spare civilians and civilian infrastructure in military operations. 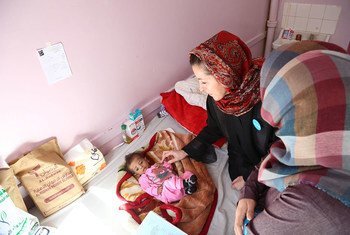