While welcoming the entry to force of a new Penal Code in Afghanistan as a having the “potential to trigger real change,” the United Nations mission in the country said on Thursday that it is concerned by the removal of the chapter penalizing violence against women.

The penal Code entered into force last week, placing the country, for the first time, into compliance with international treaty obligations in criminal justice, the United Nations Assistance Mission in Afghanistan (UNAMA) said.

“Together with international partners and experts from UN agencies, UNAMA supported Afghan authorities in drafting the code,” the UN Mission said.

“UNAMA will continue dialogue with stakeholders so that the application of the new codedoes not result in impunity gaps and in particular that there is a robust legal framework in place to protect women from violence,” it added.

Moreover, it incorporates the Rome Statute of the International Criminal Court – covering war crimes, crimes against humanity and genocide – and establishes command responsibility for those who fail to prevent or punish subordinates who commit these crimes.

Reforming the sanctions regime, the new Penal Code introduces alternatives to imprisonment, which judges impose for imprisonment sentencing below five years, and are mandated to impose for incarcerations less than three months. The code also significantly reduces the number of crimes for which the death penalty applies.

“The coming into force of the Penal Code will bring significant positive developments and a real potential to trigger societal transformation,” UNAMA stated.

However, removing the chapter penalizing violence against women causes concern over safeguarding the strongest possible legal protection of women.

Technical amendments to the Code will be essential to ensure that the criminal provisions of the Law on the Elimination of Violence Against Women (the EVAW Law) still apply.

UNAMA noted that the current EVAW law remains in place and continues to provide overall legal protection for women, and remains committed to facilitating dialogue on ways to strengthen the criminalization of violence against women.

“UNAMA looks forward to the full implementation of the revised Penal Code, with a view to achieving accountability for those who violate national and international laws,” concluded the UN mission. 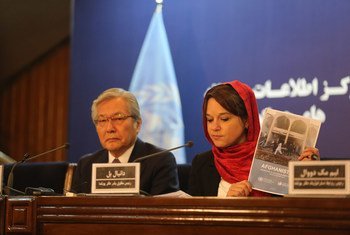 More than 10,000 civilians were killed or wounded in the Afghanistan conflict during 2017, a nine per cent drop over 2016, according to a United Nations report out Thursday which also revealed rising casualties caused by suicide bombings and attacks using improvised explosive devices (IEDs).