Every two weeks, one of the world’s languages disappears, along with the human history and cultural heritage that accompanies it, the chief of the United Nations cultural agency warned on Wednesday, calling for greater efforts to preserve and promote mother languages and indigenous languages, to bolster inclusion, diversity and ultimately, sustainable development.

“A language is far more than a means of communication; it is the very condition of our humanity. Our values, our beliefs and our identity are embedded within it,” said Audrey Azoulay, Director-General of the UN Educational, Scientific and Cultural Organization (UNESCO), on the occasion of International Mother Language Day.

“It is through language that we transmit our experiences, our traditions and our knowledge. The diversity of languages reflects the incontestable wealth of our imaginations and ways of life,” she added.

The 2018 theme for Mother Language Day its “Linguistic diversity and multilingualism count for sustainable development.”

“This commitment concerns mother languages in particular, which shape millions of developing young minds, and are the indispensable vector for inclusion in the human community, first at the local level, then at the global level,” she elaborated.

The UN agency also encourages their use in public spaces and especially on the Internet, where multilingualism should become the rule.

“Everyone, regardless of their first language, should be able to access resources in cyberspace and build online communities of exchange and dialogue,” said Ms. Azoulay, calling it “one of the major challenges of sustainable development, at the heart of the United Nations 2030 Agenda.”

According to the UN, at least 43 per cent of the estimated 6,000 languages spoken in the world are endangered. Only a few hundred languages have genuinely been given a place in education systems and the public domain, and less than a hundred are used in the digital world.

Pointing out that every two weeks a language disappears, Ms. Azoulay underscored that “promoting multilingualism also helps to stop this programmed extinction.”

“On the occasion of this international day, UNESCO invites its Member States to celebrate, through a variety of educational and cultural initiatives, the linguistic diversity and multilingualism that make up the living wealth of our world,” she concluded. 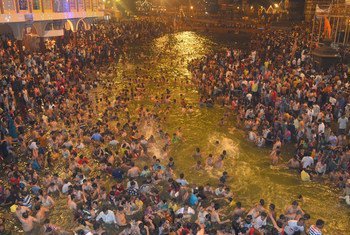 The traditional Assyk games of Kazakhstan and Italy’s culinary art of the Neapolitan ‘Pizzaiuolo’ are two of the newest elements inscribed on the United Nations Representative List of intangible contributions to preserve for future generations.