To prevent famine in the Kasai region, the World Food Programme (WFP) is stepping-up cash distributions to the most vulnerable, and specialist support to check acute malnutrition in women and young children.

“The nutrition and cash programmes are life-saving, and must quickly expand,” Claude Jibidar, WFP’s Representative in DRC, said Friday.

Since last week’s cash initiative launch – a cost-efficient alternative to in-kind support that allows beneficiaries to buy what they want in recovering local markets – 38,000 people have each received the equivalent of $15 for a month, enough to meet their basic food needs with the intention to more than double that reach in the coming weeks.

“We’re not doing nearly as much as we could in Kasai because the obstacles are huge,” Mr. Jibidar continued, “but unless we collectively rise to the challenges, many more people, including the weakest women and children, will die.”

Plumpy’Sup, a micronutrient-rich ready-to-use supplementary food, has been airlifted from France to enable a significant scale-up of WFP’s nutrition interventions in Kasai. Up from 21,000 in the final quarter of last year, 56,000 malnourished children were reached there in January with the expectation of a 20,000 a month increase to 140,000 by June.

Following the eruption of brutal political and ethnic violence in mid-2016, which claimed countless lives, razed entire villages and forced hundreds of thousands of families from their homes, WFP launched its assistance programme.

Assessments showed that 3.2 million people, a quarter of the region’s population of mostly subsistence farmers, were desperately short of food.

With no prior presence in Kasai, between September and December WFP achieved a tenfold increase in the number of people receiving food rations – to 400,000. However, lagging donations forced cereal, beans, vegetable oil and salt rations to be halfed in November.

Continued funding constraints, an upsurge in fighting between pro- and anti-Government forces and a rapid, rainy season deterioration of the already poor road network saw the number receiving half-rations drop to 130,000 in January.

“That reversal has to be corrected, and quickly,” continued Mr. Jibidar.

Limited funding is also a major challenge in the eastern DRC provinces of Tanganyika and South Kivu, where WFP is scaling up to meet the needs of growing conflict-displaced populations as part of a broad push by UN agencies and non-governmental organizations.

“We’ve shown we have capacity to deliver, but to reach sufficient scale we need the fighting to stop and donors to step up,” he concluded.

Is safety and a small plot of land too much for DR Congo’s beleaguered people to hope for? UN aid chief asks 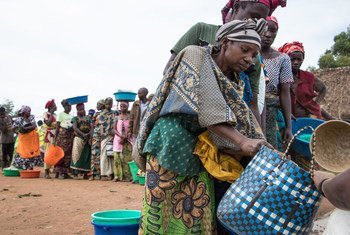 The dramatic deterioration in the humanitarian situation in the Democratic Republic over the past year has been further complicated by recent floods and health crises, the United Nations migration agency said Wednesday, appealing for urgent funding to ensure continued assistance and protection for millions in need.