Senior United Nations officials in Syria warned on Tuesday of the dire humanitarian crisis in several parts of the country, calling on warring parties to immediately stop fighting so aid and basic services can reach those in need, and the sick and critically wounded can evacuate.

“The United Nations humanitarian team in Syria warns of the dire consequences of the compounded humanitarian crisis in several parts of the country,” said a statement issued Tuesday by the UN Resident and Humanitarian Coordinator and the UN Representatives in Syria.

“In this extreme situation,” the officials called for “an immediate cessation of hostilities lasting for at least one month throughout Syria to enable the delivery of humanitarian aid and services, evacuation of the critically sick and wounded, and alleviation of people’s suffering, to the extent possible, wherever they are.”

In Afrin, the ongoing military operations and the reported blockage of exits by other forces have virtually trapped many civilians preventing them from accessing safer areas, the statement said, noting that so far, 380 families have reached surrounding villages and Aleppo city neighborhoods while thousands of people have been displaced within Afrin.

“As the fighting escalates, the number of civilians affected by violence is bound to increase,” the statement warned.

In Al-Hasakah, an agreement was reached to allow some UN partners to resume their work, after a month in which most humanitarian assistance came to a complete halt. This is a positive first step, but the agreement is only for a period of two months and covers a limited number of partners.

Turning to Ar-Raqqah, the statement noted that the city’s devastation is unparalleled and conditions remain unsafe. Many civilians trying to return home have been killed and injured by unexploded ordinances. Services are absent. Access for humanitarian workers to the city is almost impossible due to unsafe conditions.

In Idleb, the military operations resulted in increased casualties and movement of civilians to safer areas. Some of them have been forced to move several times to escape fighting. With the high concentration of displaced people, the Governorate may not be able to withstand the consequences of renewed fighting.

Foah and Kafraya in Idleb continue to be besieged by non-State armed groups, without access to much needed humanitarian supplies and medical treatment.

In the south, civilians in Al-Rukban camp remain inaccessible to the humanitarian team in Syria. The last time the camp was supplied with food and non-food items was from across the border in early January, the statement said.

Upsurge in Violence in Idlib and eastern Ghouta

Meanwhile, the UN-mandated Independent International Commission of Inquiry on Syria expressed deep concern over the further escalation of violence in Idlib governorate and in eastern Ghouta.

Over the last 48 hours, the scale and ferocity of attacks has increased dramatically resulting in multiple reports of civilian casualties and airstrikes that have reportedly hit at least three hospitals, including in Ma’aret al Nu’man, Kafr Nabl and Mardikh.

Since the beginning of the year, the increase in violence in Idlib has resulted in another upsurge of internal displacement with over a quarter of a million civilians reportedly fleeing the fighting, according to reports received by the Commission. 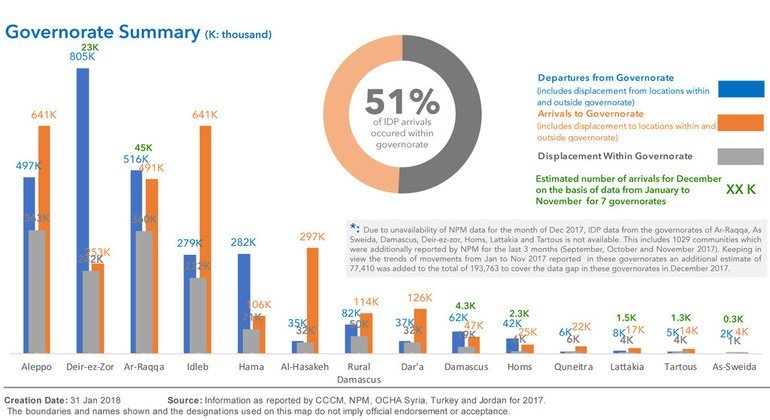 “These reports are extremely troubling, and make a mockery of the so-called ‘de-escalation zones’ intended to protect civilians from such bombardment,” said Commission Chair Paulo Pinheiro.

“The parties to this conflict are failing in their obligations under international humanitarian law, including their absolute obligation to refrain from attacks against medical facilities and personnel,” Mr. Pinheiro added.

Most alarmingly, the Commission has received multiple reports – which it is now investigating – that bombs allegedly containing weaponised chlorine have been used in the town of Saraqeb in Idlib and in Douma in eastern Ghouta.

Mounting attacks in Idlib come at a time when the escalation of violence in eastern Ghouta has also magnified the longstanding humanitarian crisis in that besieged pocket on the north-eastern outskirts of Damascus.

Airstrikes and shelling of areas held by anti-government armed groups has compounded a three-year siege in which nearly 400,000 civilians – including children – have had little access to basic assistance, including food, medicines and life-saving health assistance.

“What is happening in eastern Ghouta is not simply a humanitarian crisis because aid is denied, these sieges involve the international crimes of indiscriminate bombardment and deliberate starvation of the civilian population,” stated Mr. Pinheiro.

♦ Receive daily updates directly in your inbox - Subscribe here to a topic.
♦ Download the UN News app for your iOS or Android devices.
Commission of Inquiry on Syria|syria

Proof of chemical weapons use in Syria should be met with ‘meaningful response,’ urges UN disarmament chief

Evidence of the use, or likely use, of banned chemical weapons in Syria should be met with a “meaningful response” within the Security Council, the United Nations disarmament affairs chief said on Monday.