Stephan Gladieu/World Bank
Olivia Nankindu, 27, surveys the fruits of her labor in the waning afternoon sunlight on her farm near Kyotera, Uganda.
5 February 2018
Economic Development

The least developed countries (LDCs) – nations categorized as requiring special attention from the international community – will fall short of goals set out in the 2030 Agenda for Sustainable Development unless urgent action is taken, new United Nations analysis has revealed.

The analysis by the UN Conference on Trade and Development (UNCTAD) also highlights that LDC growth averaged 5 per cent in 2017 and will reach 5.4 per cent in 2018, below the 7 per cent growth envisaged by target 1 of Sustainable Development Goal 8 on promoting sustained, inclusive and sustainable economic growth.

“The international community should strengthen its support to LDCs in line with the commitment to leave no one behind,” Paul Akiwumi, Director of UNCTAD's Division for Africa, Least Developed Countries and Special Programmes, Mr. Akiwumi said.

“With the global economic recovery remaining tepid, development partners face constraints in extending support to LDCs to help them meet the Sustainable Development Goals. Inequalities between the LDCs and other developing countries risk widening,” he said.

The analysis contends that too many LDCs remain dependent on primary commodity exports.

While international prices for most primary commodity categories have trended upwards since late 2016, this modest recovery barely made a dent to the significant drop experienced since 2011, particularly in the cases of crude petroleum and minerals, ores and metals.

In 2017, LDCs as a group were projected to register a current account deficit of $50 billion, the second-highest deficit posted so far, at least in nominal terms.

Projections for 2018 suggest that the current account deficits of the LDCs are expected to grow further, making worse possible balance-of-payments weaknesses.

Special foreign aid commitments for LDCs amounted to $43.2 billion, representing only an estimated 27 per cent of net aid to all developing countries – a 0.5 per cent increase in aid in real terms year-on-year.

This trend supports fears of a levelling-off of aid to LDCs in the wake of the global recession. In 2016, only a handful of donor countries appear to have met the commitments under target 2 of Sustainable Development Goal 17.

Denmark, Luxembourg, Norway, Sweden, and the United Kingdom provided more than 0.20 per cent of their own gross national income to LDCs, while the Netherlands met the 0.15 per cent threshold.

“This analysis signals a clarion call for action,” said Mr. Akiwumi. “The international community needs to pay increased attention to their commitments toward LDCs.”

The analysis was presented to UNCTAD member States at a meeting of its governing body in Geneva, Switzerland, on 5 February. 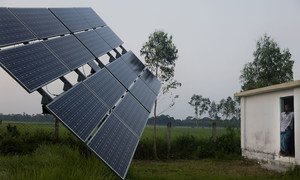 Energy is key to global development, but the world’s poorest and most vulnerable nations fare up to six times worse than their more industrialized counterparts when it comes to accessing the vital resource, the United Nations warned on Wednesday.