<a href=http://bit.ly/2iHZ5mI>Kadir van Lohuizen/NOOR</a>
Most of the reefs in the Seychelles have died due to El Niño, bleaching, fishing and the rising temperature of the seawater.
2 January 2018
Climate and Environment

La Niña is expected to impact weather around the world in 2018, a United Nations relief official said, urging governments and the international community to act early to mitigate the impacts from this potentially destructive weather pattern and its counterpart, El Niño.

“We know that the earlier we’re able to put in place a response, the more efficient and effective that response can be,” Greg Puley, Chief of Policy Advice and Planning Section, UN Office for the Coordination of Humanitarian Affairs (OCHA), told UN News.

Its counterpart La Niña is associated with cooler-than-average sea surface temperatures, but it also results in extreme weather.

In 2016, 23 countries – representing 60 million people – had to appeal for emergency aid because of El Niño-related weather events.

While there is never 100 per cent certainty that a weather event will happen, Mr. Puley urged governments “to be willing to act on the clues.”

He discussed insurance, or forecast-based funding, which released funding early, as innovations that have “no regrets” even if a predicted event does not happen.

“If you’re aware that excess precipitation is forecast, for example, you can make some investment to reinforce river beds so that the excess precipitation doesn’t result in flooding,” he said. “It will cost you $10 million to reinforce the river bed. It might have cost you $50 or $60 million to provide food, water and shelter to people who are displaced by the flood. You can make those investments when you know.” 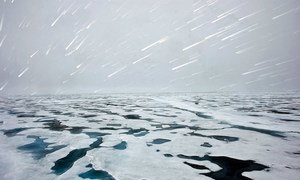 Strengthening weather and climate services to protect lives, property and the economy from increasingly extreme and unusual weather is among the pressing issues being discussed at the annual session of the United Nations weather agency's coordinating body, which kicked off today in Geneva.