A destroyed classroom at Gerver Secondary School in Ninewa Governorate, Iraq. Much of the school was damaged when the area was occupied by militants in 2015. UNICEF/UNI199916/Jemelikova
31 January 2018
Humanitarian Aid

Nearly three in ten young people between the ages of 15 and 24 living in conflict- or disaster-affected countries are illiterate, the United Nations Children's Fund (UNICEF) said Wednesday, calling for greater investments in the education, particularly for the most disadvantaged children and youth.

The situation is particularly dire for girls and young women in that age group, with 33 per cent of them in emergency countries failing to learn even the basics, compared to 24 per cent of boys.

“These numbers are a stark reminder of the tragic impact that crises have on children's education, their futures, and the stability and growth of their economies and societies,” said Henrietta H. Fore, the Executive Director of UNICEF, in a news release announcing the findings.

“An uneducated child who grows into an illiterate youth in a country ripped apart by conflict or destroyed by disasters may not have much of a chance.”

The findings, calculated using literacy data from the UN Educational, Science and Cultural Organization (UNESCO) in 27 emergency countries, also revealed that Niger, Chad, South Sudan and the Central African Republic – all with a long history of instability and high levels of poverty – recorded the highest illiteracy rates among those aged 15-24 with 76 per cent, 69 per cent, 68 per cent and 64 per cent, respectively, unable to read or write.

Globally, the number stands at 59 million.

Education can make or break a child's futureUNICEF chief Fore

Ensuring adequately funding for education programmes, particularly during humanitarian crises, is critical to improve these statistics.

At present, only 3.6 per cent of humanitarian funding goes toward providing education for children living in emergencies, making it one of the least funded sectors in humanitarian appeals.

UNICEF estimates that over the next four years, it will spend approximately $1 billion a year on education programmes.

In its 2018 Humanitarian Action for Children appeal, launched on Tuesday, the UN agency called for $900 million for education in countries affected by conflicts and natural disasters. Some of its key interventions include accelerated education and non-formal learning opportunities, training teachers, rehabilitating schools and distributing school furniture and supplies.

At the same time, UNICEF also called on Governments and partners to provide young children with access to quality early education programmes to support their development and set them up to continue learning throughout their childhood; and offer illiterate young people the opportunity to learn to read and write and further their education through specially designed alternative and accelerated education programmes.

“For all children to fully reap the benefits of learning, it is key that they get the best quality education possible, as early as possible,” she stressed.

The UNICEF analysis has been released ahead of the Global Partnership for Education Replenishment Conference in Dakar, Senegal, (1-2 February) which aims to raise funding for education from partner countries, and current and new donors in order to ensure that all children and youth are in school and learning. 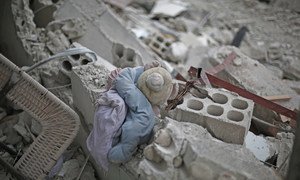 With families in Syria’s besieged northern town of Afrin on the run or hiding in basements to escape intense shelling, the head of the United Nations Children’s Fund (UNICEF) operations in the country has strongly denounced the rising number of child casualties, questioning whether the world is “becoming numb to the killing of children.”