Inter-ethnic violence and clashes between the regular army, militia and armed groups in the provinces of Tanganyika and South Kivu have left some 1.3 million people displaced.

“Children in the eastern DRC continue to suffer devastating consequences as waves of violence destabilize the region,” said Tajudeen Oyewale, the acting head of UNICEF in the vast African nation said on Thursday.

They are being sexually abused and recruited to fight.

UNICEF and its partners have identified more than 800 cases of sexual abuse, although the true scale of sexual violence being perpetrated against children is believed to be much larger.

Recent UNICEF data shows that more than 3,000 children have been recruited by militias and armed groups over the past year, raising concern over how the fighting has impacted children’s health and nutritional wellbeing.

In 2017, the two provinces recorded 18,250 suspected cholera cases, twice as many as in 2016, and 18,000 suspected cases of measles. Today, numerous health centres are no longer functioning there.

“Hundreds of thousands of children in the region no longer have access to health care and education, while many have suffered atrocities at the hands of combatant,” added Mr. Oyewale.

Violence has also prevented many people from working the fields to raise crops, fuelling a heightened risk of food insecurity and raising the possibility that thousands of children could suffer from malnutrition due to the lack of food.

As part of its emergency response programme in Tanganyika and South Kivu, UNICEF is providing multi-sectoral support to the displaced population, including immunizing children against measles; cholera prevention and treatment; assisting malnourished children; and offering protection, treatment and psychosocial support for children affected by violence, along with those who are injured or unaccompanied.

To assist the affected children both provinces, the UN agency has appealed for $65 million in support of its response over the next six months.

UNICEF continues to call on all conflict parties to guarantee humanitarian access to people in urgent need of assistance.

“It is simply a brutal situation for children with no end in sight,” Mr. Oyewale stressed. 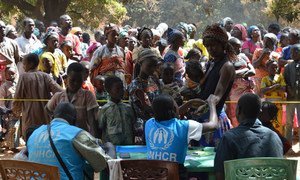