Elephants, giraffes, rhinos and other magnificent mammals targeted in wildlife conservation areas of Central Africa are under threat of extinction, caught in the crosshairs of armed groups and highly-militarized poachers, the United Nations environment wing warned on Friday.

“The importance of engaging local communities in fighting poaching, and of enhancing their alternative livelihoods, has now been widely recognized across various national, regional and global fora” said Bianca Notarbartolo of the UN Environment Programme (UNEP).

“But such commitments have yet to be matched by enough effective implementation,” she added.

UNEP’s warning comes in the wake of the release last month by the non-governmental organization Traffic of a report reflecting the grim reality the negative impact of armed groups on wildlife in Central Africa.

As recently as three decades ago, thousands of elephants strode majestically across the wildlife conservation areas of Central Africa. Today, their population has been decimated, according the 2017 report.

The situation appears even grimmer for the giraffes. In many African societies, the flywhisk, usually made from the animal’s tail, is a symbol of authority. The flywhisk from the Kordofan giraffe is particularly prized, putting this species in danger from poachers and other armed groups. Consequently, only about 40 giraffes remain in the Garamba Park.

Chimpanzees have also not been spared from the onslaught. The population of eastern chimpanzees in eastern the Democratic Republic of the Congo (DR Congo) has declined by 80 to 98 per cent, mainly because of poaching for bushmeat – attributed to demand for protein, particularly intense around artisanal mining and logging camps.

The dual effect of insufficient nutrition, coupled with mining pollution is likely to exacerbate the threat to the region’s biodiversity, resulting in a downward spiral that could jeopardize future livelihoods of numerous local communities.

In May 2016, UNEP and other UN partners launched the Wild For Life campaign, which has been raising awareness, promoting the enactment and enforcement of laws, and increasing support for efforts by local communities to halt the illegal trade in wildlife. Elephants and Rhinos are among the species targeted by the campaign.

“Strengthening the role of local communities in wildlife management should be at the centre of any strategy to combat illegal trade in wildlife and to secure wildlife and biodiversity for the future,” stressed Ms. Notarbartolo.

Ton of cocaine incinerated in UN-backed operation in Kenya 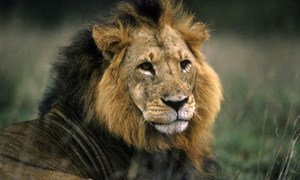 Unless the international community integrates wildlife conservation with sustainable development, it will not be able to protect the remaining animal species on Earth, the head of a United Nations-backed environmental treaty today said at the opening of a wildlife conference in the Philippines.