The threats of violent extremism and transnational organized crime in Afghanistan reverberate across Central Asia and the world and countering them cannot be the responsibility of one country alone, United Nations Secretary-General António Guterres said Friday, urging regional and multilateral cooperation, based firmly on human rights.

Convened by Kazakhstan in its capacity as the President of the Security Council for the month of January, the ministerial-level debate was chaired by the country’s Foreign Minister, Kairat Abdrakhmanov.

“With greater regional cooperation and investment, Central Asia and Afghanistan have the potential to become symbols of dialogue, peace, and the promotion of contacts between cultures, religions and civilizations,” Mr. Guterres continued.

The Secretary-General also highlighted significant opportunities for intra-regional trade and said that even “modest” improvements can result in substantial gains for all the people of the region.

In that context, he noted ongoing recent intensification of cooperation between Central Asian governments on water resources through bilateral water commissions and agreements.

“These developments hold important lessons for Afghanistan, where water-dependent farming and agriculture make up nearly half the economy,” he said, noting also developments in energy cooperation and projects on strengthening trade and transport connectivity.

Mr. Guterres went on to underscore the importance of sustainable development to enable communities and societies flourish and fulfil their potential and in that context, urged Governments to make education, vocational training and jobs “an absolute priority” in national and regional development cooperation.

Only by addressing the root causes of crisis, including inequality, exclusion and discrimination, will we build peaceful societies resilient to terrorism and violent extremismSecretary-General Guterres

Inclusive and sustainable development, he underlined, is vital to preventing and ending conflict, and in sustaining peace.

“Only by addressing the root causes of crisis, including inequality, exclusion and discrimination, will we build peaceful societies resilient to terrorism and violent extremism,” added the Secretary-General.

Concluding his remarks, Mr. Guterres also spoke of the work of the UN Regional Centre for Preventive Diplomacy for Central Asia (UNRCCA) and the UN Assistance Mission in Afghanistan (UNAMA) in supporting the region and countries.

“The entire UN family stands ready to assist in promoting greater cooperation and integration among the countries of Central Asia and Afghanistan, toward achieving the goals of peace, sustainable development, stability and security,” he said. 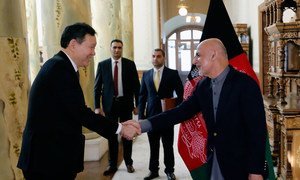 In Afghanistan, Security Council reiterates support for efforts to restore peace and progress

The United Nations Security Council, during a weekend mission to Afghanistan, reiterated its support for the Central Asian country’s efforts to restore peace, stability and progress.