Following a two-day visit to conflict-ravaged South Sudan, where a quarter of a million children are severely malnourished and at imminent risk of death, the head of the United Nations children's agency has said only an end to hostilities can bring back hope and safety to the children and young people there.

“I have just spent two days in South Sudan where I saw first-hand how four years of a man-made conflict have left children sick, hungry and on the brink of death,” Henrietta H. Fore, the Executive Director of the UN Children's Fund (UNICEF), said Thursday in the capital, Juba, as she wrapped up her visit.

She said the impact of the relentless violence has been devastating. She recalled meeting a mother who had to walk for days to get treatment for her malnourished baby. Recounting another grim incident, Ms. Fore said she had spoken with a young boy who was forced to join an armed group at the age of 10.

At the same time, she said, she saw “signs of hope” emanating from the families experiencing the horror.

“UNICEF and other aid agencies are working on the ground in some of the most dangerous conditions to provide children and young people with their basic needs. This is no small feat,” she said, describing South Sudan “the most dangerous place in the world for humanitarians” as 28 aid workers were killed last year alone.

VIDEO: During her visit to South Sudan, new Executive Director of UNICEF, Henrietta Fore, urges end to conflict to bring back hope and safety for the young people of the strife-torn nation.

Forces loyal to President Salva Kiir and his former Vice-President Rieck Machar, have been battling for the past five years, turning what began in 2013 as a political rivalry into all out conflict that, according to the UN relief wing, has left some seven million people in need of assistance and protection, and forced more than two million to flee to neighbouring countries.

“The numbers go on and on. Together they equal an entire generation of young people denied the opportunities they so desperately need to contribute to building their society,” she said.

As the dry season approaches, the needs – and threats – will only continue to grow.

“Only an end to hostilities can bring back hope and safety to the children and young people of South Sudan. Until then, we need unconditional, sustainable access from parties to the conflict and more resources from donors,” she said. “Without these, the lives and futures of millions of children in South Sudan will continue to hang in the balance.” 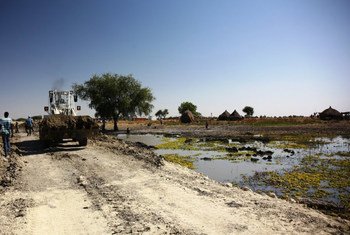 For Samuel James Ayot, a villager from Akoka in rural north South Sudan, accessing basic services and earning a livelihood does not mean having to make a perilous neck-deep wade across a river, thanks to the tireless efforts of Indian peacekeepers from the United Nations mission there, who rebuilt a bridge and connected his village to a major provincial town.