The decision by the United States to withhold more than half its annual funding commitment to the United Nations relief agency providing aid for Palestine refugees threatens “one of the most successful and innovative human development endeavours in the Middle-East,” the head of the body said Wednesday, warning that the rights and dignity of an entire community are at stake.

In a statement Wednesday, Pierre Krähenbühl, the Commissioner-General of the UN Relief and Works Agency for Palestine Refugees in the Near East (UNRWA), said that US government announced a contribution of $60 million for the UN agency, down from $350 million total contribution by the country in 2017.

The reduction has endangered the agency’s programmes across the region, he added.

“At stake is the access of 525,000 boys and girls in 700 UNRWA schools, and their future. At stake is the dignity and human security of millions of Palestine refugees [and] access of refugees to primary health care, including pre-natal care and other life-saving services,” added Mr. Krähenbühl in the statement.

He further noted that the reduced contribution “also impacts regional security at a time when the Middle East faces multiple risks and threats, notably that of further radicalization.”

In the statement, the Commissioner-General called on the agency’s partners, including host countries and donors to continue to support UNRWA and in creating new funding alliances and initiatives to ensure the continued effectiveness of its programmes.

He also noted that a global fundraising campaign will be launched in the days to come to seek commitment for UNRWA initiatives, including its schools and clinics throughout 2018 and beyond.

Also in the statement, Mr. Krähenbühl assured Palestine refugees in all of the agency’s fields of operations that UNRWA would continue to work with “absolute determination” to ensure that its services continue.

“UNRWA stands for hope, for respect of rights and for dignity. When things are difficult, our determination grows. When the way seems lost, we invest all our energy in search of new paths, keeping our eyes on the horizon and looking for different solutions,” he stressed.

UNRWA programmes important as a factor of stability – UN chief

Speaking to the press Tuesday at UN Headquarters in New York, prior to the announcement by the US of reduction in its funding to UNRWA, Secretary-General António Guterres underlined the importance of the UN agency’s support programmes, not only for the well-being of the refugees but also its importance as a factor of stability, something which he noted is the “opinion shared by most international observers, including some Israeli ones.”

“So, if UNRWA will not be in a position to provide the vital services and the emergency forms of support that it has been providing, this will create a very, very serious problem. And we’ll do everything we can to avoid the situation to occur,” said Mr. Guterres. 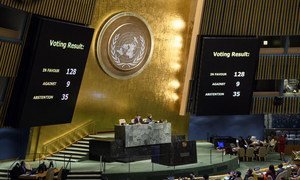