OCHA/Ivo Brandau
Women gather at a food distribution point in Nyanzale, North Kivu, Democratic Republic of the Congo. The distribution targets the most vulnerable households and serves around 30 per cent of all displaced families.
17 January 2018
Humanitarian Aid

The dramatic deterioration in the humanitarian situation in the Democratic Republic over the past year has been further complicated by recent floods and health crises, the United Nations migration agency said Wednesday, appealing for urgent funding to ensure continued assistance and protection for millions in need.

“The humanitarian situation in the DRC is at breaking point as is our capacity to respond due to extremely limited funding,” said Jean-Philippe Chauzy, said the head of operations for the UN International Organization for Migration (IOM) in the country.

“The stories that Congolese, who have been forced from their homes, are telling us are bone-chilling. They have been through so much already – torture, rape and murder of their loved ones – we cannot stand idly by as they suffer in silence,” he added.

Speaking exclusively to UN News, Mr. Chauzy said: “If we don’t get that level of funding then, there are people who will die. I have to be clear with this. People will die.”

He said that the severe malnutrition rates in the Kasai have increased by 750 per cent largely because the people in the region have been displaced so often, three planting seasons have been missed.

“[So] if you don’t provide that kind of food assistance now – to kind of bridge that gap – people who have been living off foraging in the forest, they will suffer, and the most vulnerable will die first. Children will die first. And that’s a fact,” he warned.

Across the country, some 4.3 million remain displaced, of them 1.7 were forced from their homes last year. In 2018, over 13 million are feared to be in need of humanitarian assistance throughout the country. Children, young men, women and ethnic minorities are among the hardest hit, and nutrition, food-security and protection greatest needs.

Particularly worrying is that an estimated 4.7 million women and girls could be exposed to gender-based violence in crisis stricken areas.

However, in face of such daunting challenges, IOM’s response appeal is severely underfunded. Since the release of its appeal, only $3.5 million was received in 2017 and only 47 per cent of the overall inter-agency Humanitarian Response Plan (for 2017) was funded.

“Funding levels are at their lowest for many years, with DRC seeming to have ‘fallen off the map’ for many donors, at a time when we are facing vastly increased humanitarian needs,” added Mr. Chauzy, hoping that the same does not continue through 2018.

The UN agency has appealed for $75 million to urgently meet the growing needs of displaced Congolese and the communities hosting them in the eastern and south-central provinces of North and South Kivu, Tanganyika and the Kasai.

Its interventions in 2018 will focus on camp coordination management; displacement tracking; shelter and non-food items (NFIs); water, sanitation and hygiene; health; and protection.

According to IOM, a revised inter-agency Humanitarian Response Plan is to be released Thursday, 18 January. 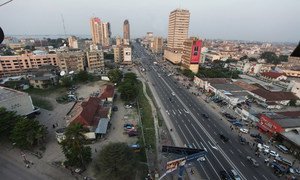 Voicing serious concern over the continued political impasse and violence in the Democratic Republic of the Congo (DRC), the United Nations Security Council has called upon all political actors to exercise maximum restraint and to address their differences peacefully.