MONUSCO/Myriam Asmani
A view of downtown Kinshasa, the capital of the Democratic Republic of Congo (DRC).
16 January 2018
Peace and Security

Voicing serious concern over the continued political impasse and violence in the Democratic Republic of the Congo (DRC), the United Nations Security Council has called upon all political actors to exercise maximum restraint and to address their differences peacefully.

In a statement issued to the press on Tuesday, Council members reiterated that effective, swift and timely implementation of the 31 December 2016 Agreement and the recently adopted electoral timeline, are essential for a peaceful and credible electoral process, a democratic transition of power, and the peace and stability of the DRC, as well as in supporting the legitimacy of the transitional institutions.

In that context, the Council underscored the need “to do everything possible to ensure that the elections on 23 December 2018 are organized with the requisite conditions of transparency, credibility and inclusivity, including the full and equal participation of women at all stages, as well as the importance of youth engagement.”

Further in the statement, the Council underscored the need for the Government to swiftly and fully investigate the killing of the two members of the Group of Experts and bring those responsible to justice.

Experts Michael Sharp (United States) and Zaida Catalan (Sweden) were abducted in the DRC on 12 March. Their remains were recovered by peacekeepers from the UN Mission in the country (known by its French acronym, MONUSCO) on 27 March outside the city of Kananga in the Kasaï-Central province.

Also in the statement, the members of the Security Council expressed concerns over the humanitarian situation in the DRC and noting that it had reached “catastrophic levels” in some parts of the country, called on UN Member States to scale up funding to urgently respond to the pressing humanitarian needs in the country.

The statement by the 15-member Council follows a briefing it heard by Jean-Pierre Lacroix, the UN Under-Secretary-General for Peacekeeping Operations, last Tuesday on the political, human rights, security and humanitarian situation in the country. 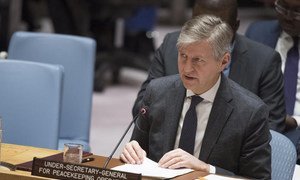 Political brinkmanship and a refusal to compromise will only result in further delays in preparations for elections and deepening of the political crisis in the Democratic Republic of the Congo (DRC), which has been gripped by a recent spate of violent protests, the United Nations peacekeeping chief told the Security Council Tuesday.