OCHA/Eman
With up to 20 people sharing a room, diseases such as measles and respiratory infections are a significant threat in Yemen, especially for children already reeling from malnutrition and dealing with inadequate water and sanitation facilities.
16 January 2018

As the brutal conflict in Yemen nears its grim third anniversary, malnutrition and disease are running rampant in the country and virtually every child there is dependent on humanitarian aid to survive, the United Nations Children's Fund (UNICEF) said on Tuesday.

“An entire generation of children in Yemen is growing up knowing nothing but violence,” said Meritxell Relano, the head of UNICEF operations in the war-torn country, underlining the gravity of the crisis.

“Malnutrition and disease are rampant as basic services collapse. Those who survive are likely to carry the physical and psychological scars of conflict for the rest of their lives,” she stated.

Hospitals, medical facilities as well as water and sanitation systems have been rendered inoperable across large parts of the country, and humanitarian assistance is the lifeline for over three-fourths of the country's population.

This dire situation in Yemen, has perhaps had the worst impact on the three million children born in country since the conflict erupted.

In its latest report, Born into War – 1,000 Days of Lost Childhood, UNICEF notes that 30 per cent of that number were born premature, another 30 percent had low birth weight and 25,000 died at birth or within the first month of life.

VIDEO: A new UNICEF report reveals the scale of impact of the conflict in Yemen on the country's children

Furthermore, more than half of all children in Yemen lack access to safe drinking water or adequate sanitation, children-under-five represent over a quarter of all cases of cholera and acute watery diarrhoea. An additional 1.8 million children are estimated to be acutely malnourished, including nearly 400,000 severe acutely malnourished children “fighting for their lives” adds the report.

The report calls on all parties to the conflict, those with influence on them and the global community to prioritize the protection of children in Yemen by putting an immediate end to violence and reaching a peaceful political solution.

It also calls for sustainable and unconditional humanitarian across the country and lifting of restrictions on imports of goods into Yemen as well as for sustained and sufficient funding for aid programmes. 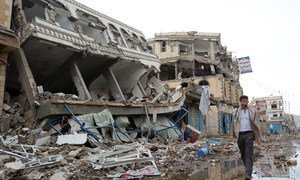 Despite progress over the past month in opening Yemen’s Red Sea ports to commercial and aid shipments, the United Nations relief chief on Friday approved the largest-ever emergency relief allocation – $50 million – amid concerns that the humanitarian catastrophe in the war-raved country is being made worse by the recent increase in fighting and airstrikes.