UN Photo/Eskinder Debebe
Secretary General António Guterres briefs an informal meeting of the General Assembly on his concerns for 2018.
16 January 2018
Peace and Security

Having taken office with a call for peace to be the watchword of 2017, United Nations Secretary-General António Guterres on Tuesday said the world instead had ‘gone in reverse,” and that there are critical areas that need action in the New Year, including climate change, the nuclear issue on the Korean Peninsula, the Middle East conflict, and the Rohingya crisis.

“I took office last year calling for us to make 2017 a year for peace. One year later, we must recognize that peace remains elusive,” the Secretary-General said in his informal briefing to the UN Member States on his top concerns for 2018.

He said that conflicts have deepened and new dangers have emerged, global anxieties about nuclear weapons are the highest since the Cold War, and climate change is moving faster than counter-measures.

Further, inequalities are growing, horrific violations of human rights are ongoing, and nationalism, racism and xenophobia are on the rise, he added, stressing the need for greater unity and courage to “set the world on track towards a better future.”

Noting that it is up to Member States to define the priorities of UN action, the Secretary-General went on to highlight some parts of the world requiring attention.

Everyone, everywhere, can do something to make our world more safe, sustainable and secure. Even in the face of headwinds and hatred, we must uphold the values of the United Nations Charter UN chief Guterres

On the Korean Peninsula, Mr. Guterres reiterated the need to avoid sleepwalking into calamity.

To that end, he welcomed the firm decisions the Security Council has taken in response to nuclear tests and ballistic missile launches by the Democratic People’s Republic of Korea (DPRK), while also welcoming the reopening of inter-Korean communication channels, especially military-to-military.

He said he was also encouraged by the decision of the DPRK to participate in the upcoming Winter Olympics in the Republic of Korea.

“We need to build on these small signs of hope, and expand diplomatic efforts to achieve the peaceful denuclearization of the Korean Peninsula in the context of regional security,” he said.

On the broader Middle East region, including Yemen, Syria and Iraq, he said the situation has become a Gordian knot, stressing the need for “disentangling the mess.”

“With so many inter-related flashpoints, the risk of an escalatory cycle is real,” he said.

As for the conflict between Israelis and Palestinians, there is no alternative to a two-State solution, he stressed.

The UN chief also stressed the need for pushing back the dangerous tide of nationalism in Europe, and the need for revitalizing the relevant mediation initiatives for Eastern Ukraine, Nagorno-Karabakh, Georgia and Transnistria.

A concerted effort is also urgently needed for solutions leading to long-term stability in the Western Balkans, he added.

Turning to the need to reverse the large-scale exodus of Myanmar’s Rohingya Muslims, Mr. Guterres called on the Government to ensure unfettered humanitarian access in Rakhine State, and appealed to the international community to support those who have fled to Bangladesh.

Mr. Guterres stressed the need for promoting a true new deal for fair globalization. “It is not by chance that eight people have as much wealth as the poorest half of humankind,” he said.

The workings of the global economy and international trade are the product of human choices. The 2030 Agenda for Sustainable Development is a bold vision to build prosperous, peaceful societies for all, leaving no one behind. “This work depends crucially on financing,” he said.

The UN chief also underscored the need to greatly increase ambition in the fight against climate change.

“The year 2016 saw the first rise in CO2 emissions in three years. The past five years have been the hottest period on record,” he said, adding that he will convene a climate summit next year to build momentum among the international community for more ambitious reductions in emissions, as well as adaptation and the much-needed energy transition.

On migration, Mr. Guterres said that it is a positive global phenomenon, and therefore the adoption of the Global Compact for Safe, Orderly and Regular Migration is an important task for this year.

Regarding technological advances, he said it is important to reap the benefits of the Fourth Industrial Revolution while guarding against the threats.

Technological advances can help provide answers to many of today’s most pressing challenges, but at the same time, technology can exacerbate inequality.

One cross-cutting imperative, he said, is the empowerment of women.

He said he has launched a roadmap for achieving gender parity at all levels of the United Nations, now reaching full parity in the 44 member UN Senior Management Group.

He also explained how he is taking action on preventing sexual exploitation and abuse against women, and preventing and addressing sexual harassment.

“All our challenges – everything, everywhere, demand an investment of time, money, energy, political capital and more. Member States must assume their leadership,” Mr. Guterres said.

“But everyone, everywhere, can do something to make our world more safe, sustainable and secure,” he said. 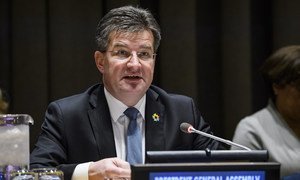