UNHCR/Fabio Bucciarelli
Somali and Eritrean refugees wash at a reception centre at the port of Augusta, Sicily. They had been rescued at sea by the Spanish Coast Guard after setting out from Libya. (file)
9 January 2018

The United Nations refugee agency on Tuesday appealed to the Israeli Government to not forcibly send Eritrean and Sudanese refugees or asylum seekers to sub-Saharan Africa.

This appeal came after some 80 cases were identified in which people relocated by Israel risked their lives by taking dangerous onward journeys to Europe.

“Feeling they had no other choice, they travelled many hundreds of kilometres through conflict zones in South Sudan, Sudan and Libya after being relocated by Israel,” the spokesperson of the Office of the UN High Commissioner for Refugees (UNHCR), William Spindler, told reporters in Geneva.

He said that along the way, “they suffered abuse, torture and extortion before risking their lives once again by crossing the Mediterranean to Italy.”

UNHCR staff interviewed them in Rome between November 2015 and December 2017 in reception centres and informal settlements. All were adult males, some with family members still in Israel, who had entered via the Sinai.

“In every case,” he explained, “they reported torture, mistreatment and extortion before reaching Israel,” adding that some said that others travelling with them had died en route to Libya.

The majority maintained that they had been transferred from Israel to a country in Africa and provided with $3,500 dollars.

“However, the situation on arrival was different to what most had expected – and with little further support provided beyond accommodation on the first night. They reported feeling unsafe, as they were known to have money,” he said.

UNHCR is seriously concerned over Israel's plans announced on 1 January to forcibly relocate Eritreans and Sudanese to countries in Africa or have them face indefinite detention.

Official statements that the plans may eventually target families and those with pending asylum claims, or that asylum seekers might be taken to the airport in handcuffs, are particularly alarming.

“At a time when UNHCR and partners in the international community are engaged in emergency evacuations from Libya, forced relocation to countries that do not offer effective protection and the onward movement of these people to Libya and Europe is particularly worrisome,” Mr. Spindler underscored.

There are some 27,000 Eritreans and 7,700 Sudanese in Israel, however since 2009, when Israel took over refugee status determination from UNHCR, only 10 Eritreans and one Sudanese have been recognized as refugees.

While 200 Sudanese from Darfur were granted humanitarian status in Israel along with an announcement that 300 more will follow, Israel has not received any Eritreans or Sudanese since May 2016.

“UNHCR stands ready to work with Israel to find alternative solutions for the protection needs of asylum seekers, in line with international standards,” concluded Mr. Spindler. 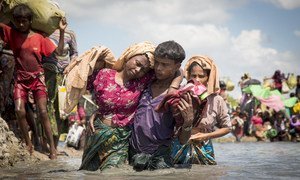