UNMIL/Shpend Berbatovci
A voter in Liberia casting his ballot for a president in the second round of vote on 26 December 2017.
29 December 2017

United Nations Secretary-General António Guterres on Friday congratulated George Weah on his election as the next President of Liberia, and commended Vice-President Joseph Boakai for conceding defeat.

In a statement issued by the UN Spokesperson welcoming the announcement by the National Elections Commission on 29 December of the final results of the presidential run-off election in Liberia, the Secretary-General applauded all Liberians for the successful completion of the elections process, which was conducted in a peaceful environment.

The statement went on to express the UN chief's appreciation for the efforts of former President Olusegun Obasanjo of Nigeria, a member of his High-level Advisory Board, and welcomed the steadfast good offices of his Special Representatives Farid Zarif of the UN Mission in Liberia (UNMIL) and Mohammed Ibn Chambas of the UN Office for West Africa and the Sahel (UNOWAS).

”The Secretary-General notes that the conclusion of peaceful, transparent, free and fair elections confirms Liberia's steady march towards lasting peace, stability and development,” the statement continued, adding that Mr. Guterres also noted that the challenges that lie ahead are significant and will require unity of purpose by the President-elect and his Government, as well as all political stakeholders.

The Secretary-General looks forward to working closely with the President-elect and the people of Liberia towards the consolidation of peace and economic development, the statement concluded. 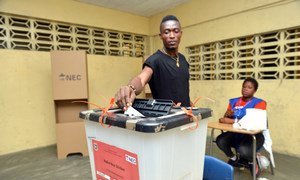 United Nations Secretary-General António Guterres on Wednesday welcomed the peaceful conduct of the second round of the presidential election in Liberia, and announced he is sending former Nigerian leader Olusegun Obasanjo to support the country in the first peaceful transfer of power from one democratically-elected leader to another in more than 70 years.