In a year which saw millions of Somali civilians displaced by armed conflict and thousands more killed and wounded in violence, the United Nations envoy to the country has called for sustained cooperation to tackle a number of pressing challenges.

“No one should underestimate the many challenges ahead, and the serious issues that continue to retard and even threaten further progress,” said Michael Keating, the Special Representative of the Secretary-General for Somalia.

“These include pervasive corruption, most obviously in politics, and powerbrokers’ willingness to use violence, or the threat of violence, against opponents,” he added.

Noting that the militants have retained the capacity to mount such devastating attacks, Mr. Keating also emphasized that the terrorist group thrives, among other things, on the absence of functional local government and on the many conflicts around the country.

At the same time, there is “severe and growing” humanitarian needs across the Horn of Africa nation.

According to the UN Office for the Coordination of Humanitarian Affairs (OCHA), food security needs are nearly double the five-year average due to limited rain, increased displacement, lack of access to basic services, and continuing insecurity and conflict.

“The number of people in [humanitarian] emergency [phase] have increased tenfold from 83,000 in January to 866,000 people in November 2017,” OCHA said in a humanitarian bulletin.

“Humanitarian Emergency” is a state in which the acute malnutrition rate has surpassed the “emergency threshold” of 15 per cent. In Somalia, the rate stands at 17.4 per cent.

Across the country, some 6.2 million are in need of humanitarian and protection assistance and more than half that number require urgent life-saving assistance. This year witnessed the displacement of a further one million Somalis, taking the total across the country to more than two million.

Prospects of humanitarian recovery in 2018 ‘grim’

However, with forecasts for poor rains during the two main crop seasons and as well as a heightened risk of the La Niña weather phenomenon in early-mid 2018, the prospects for recovery next year look “grim,” said the UN relief wing.

Life-saving assistance will, therefore, remain an urgent priority, it said, noting the need to also address the underlying causes of recurring humanitarian crises.

“In line with the New Way of Working and building on efforts since 2012 to create household resilience, humanitarian and development partners are pursuing more sustainable mid- to longer-term investment in reducing risk and vulnerability,” said OCHA.

In the same vein, Mr. Keating, who also heads the UN Assistance Mission in Somalia (UNSOM), underscored the need the need for greater cooperation to overcome the obstacles.

“Lessons can be drawn from 2017, both good and bad. A central one may be that when the most powerful actors cooperate, whether the Federal Government, Federal Member States, parliamentarians, clan elders, business or the international community, great progress can be made,” he said.

“When they do not cooperate, the risks are enormous.” 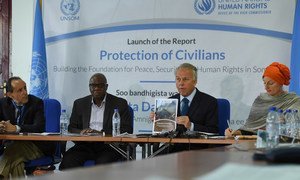 The armed conflict in Somalia continues to exact a heavy toll on civilians, damaging infrastructure and livelihoods, displacing millions of people, and impeding access to humanitarian relief for communities in need, according to a United Nations report launched today in the country's capital, Mogadishu.