Welcoming the signing of an agreement on cessation of hostilities and improving humanitarian access in South Sudan, the United Nations Mission in the country (UNMISS) has urged all parties to work collectively to ensure durable peace in the nation.

“The Agreement on Cessation of Hostilities, Protection of Civilians and Humanitarian Access is an important first step in the revitalization of the peace process,” said the mission in a news release, Friday.

“UNMISS is committed to supporting the peace process in line with its mandate through advancing reconciliation efforts, strengthening conflict resolution mechanisms, building national cohesion and engaging in regional and international peace initiatives,” it added.

The Agreement was signed Thursday between the Government and opposing groups attending the High-Level Revitalization Forum in Addis Ababa, the capital of Ethiopia.

It aims to revitalize efforts to implement the 2015 peace agreement in South Sudan which came under increasing strain due to violence in the country.

Also in the news release, the UNMISS acknowledged the efforts of all actors involved in the Forum in reaching an agreement and thanked the Intergovernmental Authority on Development (IGAD), an eight-country trade bloc in Africa, for its leadership of the peace talks.

“[We] urge all parties to adhere to the Agreement and end the ongoing violence so that durable peace can be achieved in the interests of the people of South Sudan,” added the UN Mission.

The world's youngest country, South Sudan has spent much of its short life mired in conflict, riven by a political face-off between President Salva Kiir and his then former Vice-President Riek Machar, that erupted into full-blown war late in 2013. 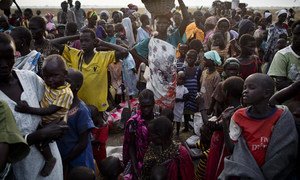 As the brutal conflict in South Sudan enters its fifth year, the United Nations Security Council on Thursday said it remains deeply concerned over the situation there, and expressed strong support for a regional initiative aimed at salvaging a 2015 peace deal.