“Gravely concerned” over risks posed by foreign terrorist fighters returning from conflict zones, the United Nations Security Council on Thursday called on Member States to strengthen their efforts to counter the threat through measures on border control, criminal justice, information-sharing and counter-extremism.

In a unanimously adopted resolution, the 15-member Council called on UN Member States to strengthen measures to prevent the transit of terrorists, including ensuring that identity documents were not forged, as well as employing evidence-based risk assessments, screening procedures, and the collection and analysis of travel data to identify individuals who posed a terrorist threat, in accordance with domestic and international law, without resorting to profiling based on discrimination.

The Council also called upon Member States to notify other countries of the travel, arrival, deportation or detention of individuals whom they had reasonable grounds to believe were terrorists as well as to take appropriate action in regards to suspected terrorists and their accompanying family members who entered their territories, including by considering appropriate prosecution, rehabilitation, and reintegration measures in compliance with domestic and international law.

While emphasizing that Member States were obliged to bring to justice anyone who participated in terrorist acts, the Council stressed the importance of assisting women or children associated with foreign terrorist fighters who might be victims of terrorism.

It also underlined the need for tailored prosecution, rehabilitation and reintegration strategies for family members that might have abetted terrorist acts in varied roles.

Further in the resolution, the Council welcomed measures being taken to strengthen travel security, including the approval of a new Global Aviation Security Plan by the International Civil Aviation Organization (ICAO) and monitoring procedures, calling for continuous upgrading of such procedures in line with developing threats.

Outlining UN efforts to address returning and relocating foreign terrorist fighters, the Council urged strengthened cooperation between all counter-terrorism bodies on the issue. 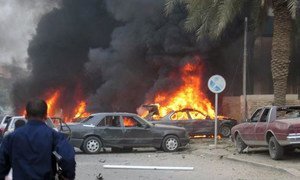